The Confusion: Volume Two of The Baroque Cycle (Paperback) 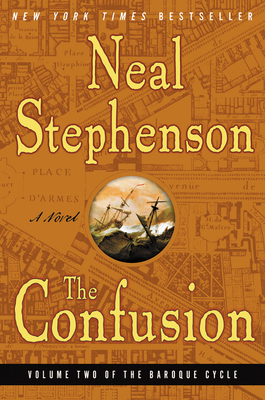 The Confusion: Volume Two of The Baroque Cycle (Paperback)

This is book number 2 in the The Baroque Cycle series.

In the year 1689, a cabal of Barbary galley slaves -- including one Jack Shaftoe, aka King of the Vagabonds, aka Half-Cocked Jack -- devises a daring plan to win freedom and fortune. A great adventure ensues -- a perilous race for an enormous prize of silver ... nay, gold ... nay, legendary gold.

In Europe, the exquisite and resourceful Eliza, Countess de la Zeur, is stripped of her immense personal fortune by France's most dashing privateer. Penniless and at risk from those who desire either her or her head (or both), she is caught up in a web of international intrigue, even as she desperately seeks the return of her most precious possession.

Meanwhile, Newton and Leibniz continue to propound their grand theories as their infamous rivalry intensifies, stubborn alchemy does battle with the natural sciences, dastardly plots are set in motion ... and Daniel Waterhouse seeks passage to the Massachusetts colony in hopes of escaping the madness into which his world has descended.

This P.S. edition features an extra 16 pages of insights into the book, including author interviews, recommended reading, and more.

Neal Stephenson is the bestselling author of the novels Reamde, Anathem, The System of the World, The Confusion, Quicksilver, Cryptonomicon, The Diamond Age, Snow Crash, and Zodiac, and the groundbreaking nonfiction work In the Beginning . . . Was the Command Line. He lives in Seattle, Washington.