Among the Russians (Paperback) 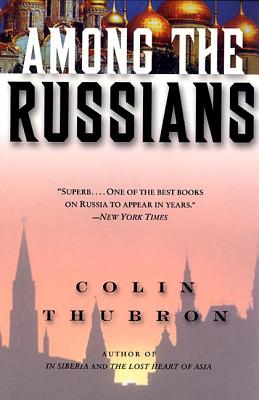 Among the Russians (Paperback)

"There is no travel writer working today in English who possesses such a remarkable combination of the observant and the lyric gifts--the most poetic of us all."  — Jan Morris

The first book in Thubron's Russian trilogy AMONG THE RUSSIANS, called "superb" by the New York Times Book Review, recounts Thurbon's 10,000 mile journey throughout half of Russia's cities and countryside.

Here is a fresh perspective on the last tumultuous years of the Soviet Union and an exquisitely poetic travelogue. With a keen grasp of Russia's history, a deep appreciation for its architecture and iconography, and an inexhaustible enthusiasm for its people and its culture, Colin Thubron is the perfect guide to a country most of us will never get to know firsthand. Here, we can walk down western Russia's country roads, rest in its villages, and explore some of the most engaging cities in the world. Beautifully written and infinitely insightful, Among the Russians is vivid, compelling travel writing that will also appeal to readers of history and current events—and to anyone captivated by the shape and texture of one of the world's most enigmatic cultures.

Colin Thubron is an acclaimed travel writer and novelist. His first books were about the Middle East – Damascus, Lebanon and Cyprus. In 1982 he travelled by car into the Soviet Union, a journey he described in Among the Russians. From these early experiences developed his classic travel books: Behind the Wall: A Journey through China (winner of the Hawthornden Prize and the Thomas Cook Travel Award), The Lost Heart of Asia, In Siberia (Prix Bouvier), Shadow of the Silk Road and To a Mountain in Tibet.

"There is no travel writer working today in English who possesses such a remarkable combination of the observant and the lyric gifts--the most poetic of us all." — Jan Morris