The First Paul: Reclaiming the Radical Visionary Behind the Church's Conservative Icon (Paperback) 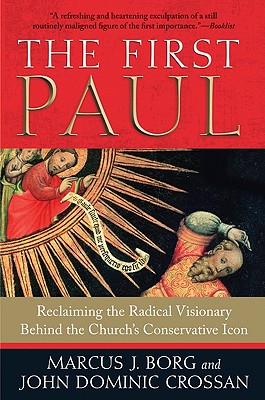 Continuing in the tradition of The Last Week and The First Christmas, world-renowned New Testament scholars Marcus Borg and John Dominic Crossan use the best of biblical and historical scholarship to expose the church's conspiracy to silence Jesus's most faithful disciple, the apostle Paul.

Marcus J. Borg (1942–2015) was a pioneering author and teacher whom the New York Times described as "a leading figure in his generation of Jesus scholars." He was the Hundere Distinguished Professor of Religion and Culture at Oregon State University and canon theologian at Trinity Episcopal Cathedral in Portland, and he appeared on NBC's The Today Show and Dateline, ABC's World News, and NPR's Fresh Air. His books have sold over a million copies, including the bestselling Meeting Jesus Again for the First Time, Reading the Bible Again for the First Time, Jesus, The Heart of Christianity, Evolution of the Word, Speaking Christian, and Convictions.

John Dominic Crossan, professor emeritus at DePaul University, is widely regarded as the foremost historical Jesus scholar of our time. He is the author of several bestselling books, including The Historical Jesus, How to Read the Bible and Still Be a Christian, God and Empire, Jesus: A Revolutionary Biography, The Greatest Prayer, The Last Week, and The Power of Parable. He lives in Minneola, Florida.

“A refreshing and heartening exculpation of a still routinely maligned figure of the first importance to culture and civilization.”
— Booklist (starred review)

“Paul is one of the most controversial figures in Christian history—and one of the most misunderstood. . . . Many will be thrilled with this fresh, erudite portrait of the man.”
— Publishers Weekly

“In this scholarly and engaging account . . . Borg and Crossan successfully argue that we must separate the genuine writings of the apostle from the writings attributed to him . . . This well-researched and highly readable account is recommended for all students of Paul [and] interested lay readers.””
— Library Journal