The Drillmaster of Valley Forge: The Baron de Steuben and the Making of the American Army (Paperback) 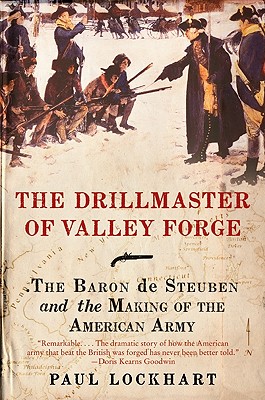 “A terrific biography….The dramatic story of how the American army that beat the British was forged has never been better told than in this remarkable book.”
—Doris Kearns Goodwin, New York Times bestselling author of Team of Rivals

The true story of the Baron de Steuben and the making of the American Army, The Drillmaster of Valley Forge is the first biography in half a century of the immigrant Prussian soldier who molded George Washington’s ragged, demoralized troops into the fighting force that eventually triumphed in America’s War of Independence. Praised by renowned historian Thomas Fleming as “an important book for anyone interested in the American Revolution,” The Drillmaster of Valley Forge rights a historical wrong by finally giving a forgotten hero his well-deserved due.

Paul Lockhart is a professor of history at Wright State University, where he teaches European and military history. He lives in Dayton, Ohio.

Lockhart makes solid use of primary and secondary sources to present a more complete picture of the Continental Army’s inspector-general.
— Publishers Weekly

[A] biography that delves into more detail about the man than any other piece of literature to date.
— Quincy Patriot Ledger

“At last, a good look at a great man. Paul Lockhart clears up all the puzzles of Steuben’s early life. He also tells an archetypal American story: an immigrant, ambitious, blustering, insecure, who gives his talents and his passion to his new-found home.”
— Richard Brookhiser, author of George Washington on Leadership

“Paul Lockhart not only tells us the forgotten story of how this German volunteer transformed the American army. He has also made him an appealing human being. This is an important book for anyone interested in the American Revolution.”
— Thomas Fleming, author of The Perils of Peace: America's Struggle for Survival After Yorktown

“Baron de Steuben has finally found the biographer he so richly deserves—and what a terrific biography this is—splendidly written with narrative sweep, deeply researched with colorful details that bring the Baron to vivid life.
— Doris Kearns Goodwin

“Lockhart writes a lively, incisive biography that exposes the inner workings of the Baron’s mind and highlights the critical role that he played in winning the Revolutionary War.”
— Edward Lengel, author of THIS GLORIOUS STRUGGLE