House of Many Ways (World of Howl #3) (Paperback) 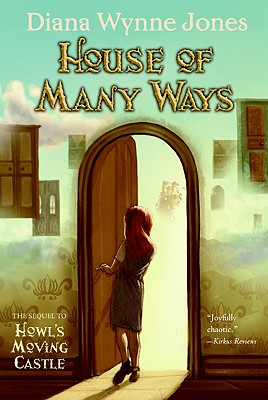 In this sequel to the international bestseller Howl’s Moving Castle, bookish Charmain finds herself smack in the middle of magical court intrigues . . . and dealing with the dashing Wizard Howl.

When Charmain Baker agreed to look after her great-uncle's house, she thought she was getting blissful, parent-free time to read. She didn't realize that the house bent space and time, and she did not expect to become responsible for an extremely magical stray dog and a muddled young apprentice wizard.

Now, somehow, she's been targeted by a terrifying creature called a lubbock, too, and become central to the king's urgent search for the fabled Elfgift that will save the country. The king is so desperate to find the Elfgift, he's called in an intimidating sorceress named Sophie to help. And where Sophie is, the great Wizard Howl and fire demon Calcifer won't be far behind.

How did respectable Charmain end up in such a mess, and how will she get herself out of it?

All fans of classic fantasy books deserve the pleasure of reading those by Diana Wynne Jones, whose acclaim included the World Fantasy Award for Life Achievement. As Neil Gaiman stated, she was "quite simply the best writer for children of her generation."

The three books in the World of Howl are:

Other beloved series from Dianna Wynne Jones include the Chronicles of Chrestomanci and the Dalemark Quartet.

“Longtime fans and new readers alike will revel in Jones’s self-assured return to the realm she charted in Howl’s Moving Castle. A tale to luxuriate in.”
— Publishers Weekly (starred review)