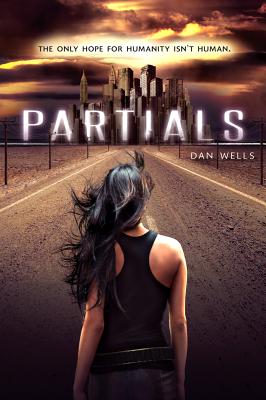 This is book number 1 in the Partials Sequence series.

“Kira barely remembers the world before the RM virus decimated the human race. It is getting harder to see a better future, or any future at all, because the virus continues to kill all newborn infants. Kira's friend is pregnant and Kira is desperate to find a cure. She talks a couple of her friends into trying something drastic to find a cure, but instead they find so much more. This is a fast-paced novel with a big surprise, and readers will be clamoring for the sequel.”
— Margaret Brennan Neville, The King's English, Salt Lake City, UT

For fans of The Hunger Games, Battlestar Galactica, and Blade Runner comes the first book in the Partials Sequence, a fast-paced, action-packed, and riveting sci-fi teen series, by acclaimed author Dan Wells.

Humanity is all but extinguished after a war with Partials—engineered organic beings identical to humans—has decimated the population. Reduced to only tens of thousands by a weaponized virus to which only a fraction of humanity is immune, the survivors in North America have huddled together on Long Island. But sixteen-year-old Kira is determined to find a solution. As she tries desperately to save what is left of her race, she discovers that that the survival of both humans and Partials rests in her attempts to answer questions about the war's origin that she never knew to ask.

Playing on our curiosity of and fascination with the complete collapse of civilization, Partials is, at its heart, a story of survival, one that explores the individual narratives and complex relationships of those left behind, both humans and Partials alike—and of the way in which the concept of what is right and wrong in this world is greatly dependent on one's own point of view.

“A thrilling sci-fi adrenaline rush, with one of the most compelling and frightening visions of Earth’s future I’ve seen yet. I couldn’t put it down.” — Pittacus Lore, #1 New York Times bestselling author of I Am Number Four

“Wells creates a compelling, fantastically complex post-apocalyptic landscape, adding thought-provoking twists to a classic story of humanity creating its own doom...With broad cross-genre appeal and an engaging balance of thematic depth and rip-roaring action, this winner will leave readers clamoring for sequels.” — Bulletin of the Center for Children’s Books

“Readers who enjoy headstrong feminist leads making their way . . . in the not-too-distant future will find plenty to like in Partials.” — Los Angeles Times