Welcome to Paradise, Now Go to Hell: A True Story of Violence, Corruption, and the Soul of Surfing (Paperback) 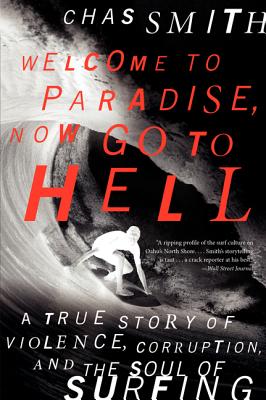 A finalist for the PEN Center USA Award for Nonfiction

For two months every winter, when Pacific storms make landfall, swarms of mainlanders, Brazilians, Australians, and Europeans flock to Oahu’s paradisiacal North Shore in pursuit of some of the greatest waves on earth for surfing’s Triple Crown competition. Chas Smith reveals how this influx transforms a sleepy, laid-back strip of coast into a lawless, violent, drug-addled, and adrenaline-soaked mecca.

Smith captures this exciting and dangerous place where locals, outsiders, the surf industry, and criminal elements clash in a fascinating look at class, race, power, money, and crime, set within one of the most beautiful places on earth. The result is a breathtaking blend of crime and adventure that captures the allure and wickedness of this idyllic golden world.

Chas Smith has spent his whole life surfing. He has written adventure/travel stories for Playboy, Esquire, Vice, GQ, BlackBook, and The New York Times Magazine. He has covered wars in Lebanon, conflicts in Yemen, dirty oil dealings in Azerbaijan, and fashion in Somalia. He is the former editor-at-living-large for Surfing magazine, and writes for Australia's Stab. He lives in Los Angeles and has spent five winters on the North Shore.

“Chas Smith is a stone-cold original-a globe-trotting, war-reporting, motorcycle-driving, cigarette-smoking, tube-riding, fashion-obsessed international dandy with a penchant for dangerous people, places, and, most of all, prose. Welcome To Paradise, Now Go To Hell is absolutely the most entertaining surf book in years, a breathless adrenalized romp.”
— Daniel Duane, author of Caught Inside, A Surfer's Year on the California Coast

“Absolutely the most entertaining surf book in years, a breathless adrenalized romp. More importantly, it’s a jaw-dropping introduction to Smith’s greatest--and most promising--literary creation, himself. This man-and this book-are both going places.”
— Daniel Duane, author of Caught Inside: A Surfer's Year on the California Coast

A vivid and somewhat disconcerting depiction of the world of surfing and its attendant problems . . . An uncommon read for those interested in surfing or those seeking a look at Hawaii from a vantage point not normally found in history books.
— Library Journal

A hip exposé of Hawaii’s North Shore surfing culture . . . entertains, while superior reporting informs and illuminates much about the surf industry’s peculiar machinations, its cavalcade of sun-bleached heroes and the troubled history of Hawaii itself . . . effortlessly shifting from the profound to the profane.
— Kirkus Reviews

A mix of reportage and gonzo journalism…. [with] trenchant…astute observations…. If Hunter S. Thompson circa Hell’s Angels merged with a fashion critic to write about surfing for Maxim, the result might be similar.
— Publishers Weekly

A book of real literary style and grace . . . gleefully mischievous . . . handles like a ‘54 Porsche: smooth, glamorous, and totally out of control.
— Flaunt

Made me think hard about the North Shore . . . To the best of my knowledge, nothing like it exists.”
— The Inertia

Smith doesn’t simply stand in judgment. He loves the world of the North Shore, and he hates it. With gleeful defiance and feral wit, he harnesses his ambivalence to fuel this compulsive, wild ride of a book.
— Sydney Morning Herald, Pick of the Week

A wild and unflinching look at the adrenalin-soaked world of surfing.
— Melbourne Herald Sun