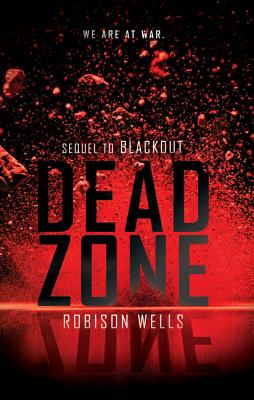 This is book number 2 in the Blackout series.

It began with a virus. Then a series of attacks erupted across the nation. Now America is at war—and a handful of teens with impossible powers are its only defense.

In Dead Zone, Robison Wells delivers his most nail-bitingly tense read yet—and an electrifying conclusion to a two-book series that’s perfect for fans of The Maze Runner and I Am Number Four.

Robison Wells is also the author of Blackout, Variant, and Feedback. Variant was a Publishers Weekly Best Book and a YALSA Quick Pick for Reluctant Readers. Robison lives in the Rocky Mountains in a house not too far from elk pastures. His wife, Erin, is a better person than he will ever be, and their three kids cause mischief and/or joy.

“This thoughtful, considered action-adventure will have readers pondering even after they’ve closed the book.” — Kirkus Reviews

PRAISE FOR BLACKOUT: “In a world where terrorism is an increasing threat, this fast-paced book brings it home.” — Kirkus Reviews

“Wells knows how to snare readers’ attention and hold them spellbound. There is no shortage of white-knuckle action.” — Publishers Weekly (starred review)