My Weird School: Teamwork Trouble (I Can Read Level 2) (Paperback) 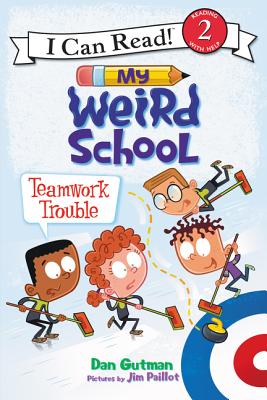 By Dan Gutman, Jim Paillot (Illustrator)
$4.99
On Our Shelves Now

This is a fun Level Two I Can Read book based on Dan Gutman’s My Weird School series, which has sold more than 12 million books!

Join the gang from Ella Mentry School in this hilarious, hijinks-filled sports story as they show young readers why they attend the weirdest—and most fun!—school around.

With help from Coach Deen, Ryan wants to form a sports team with A.J. and Andrea, but it's for one of the weirdest sports there is: curling! Will the sweepers be able to get the stones to the house, or will trouble among the teammates end in one weird mess?

My Weird School: Teamwork Trouble is a Level Two I Can Read book, geared for kids who read on their own but still need a little help.

Jim Paillot lives in Arizona (another weird place) with his weird wife and two weird children. Isn’t that weird? You can visit him on his weird website at www.jimpaillot.com