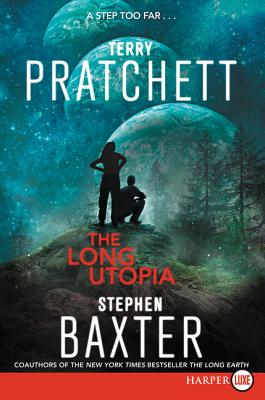 2045-2059. Human society continues to evolve on Datum Earth, its battered and weary origin planet, as the spread of humanity progresses throughout the many Earths beyond.

Lobsang, now an elderly and complex AI, suffers a breakdown, and disguised as a human attempts to live a “normal” life on one of the millions of Long Earth worlds. His old friend, Joshua, now in his fifties, searches for his father and discovers a heretofore unknown family history. And the super-intelligent post-humans known as “the Next” continue to adapt to life among “lesser” humans.

But an alarming new challenge looms. An alien planet has somehow become “entangled” with one of the Long Earth worlds and, as Lobsang and Joshua learn, its voracious denizens intend to capture, conquer, and colonize the new universe—the Long Earth—they have inadvertently discovered.

World-building, the intersection of universes, the coexistence of diverse species, and the cosmic meaning of the Long Earth itself are among the mind-expanding themes explored in this exciting new installment of Terry Pratchett and Stephen Baxter's extraordinary Long Earth series.

Sir Terry Pratchett was the internationally bestselling author of more than thirty books, including his phenomenally successful Discworld series. His young adult novel, The Amazing Maurice and His Educated Rodents, won the Carnegie Medal, and Where's My Cow?, his Discworld book for “readers of all ages,” was a New York Times bestseller. His novels have sold more than seventy five million (give or take a few million) copies worldwide. Named an Officer of the British Empire “for services to literature,” Pratchett lived in England. He died in 2015 at the age of sixty-six.

Stephen Baxter is an acclaimed, multiple-award-winning author whose many books include the Xeelee Sequence series, the Time Odyssey trilogy (written with Arthur C. Clarke), and The Time Ships, a sequel to H. G. Wells's classic The Time Machine. He lives in England.

“[T]he co-authors have created a tighter, more focused narrative that moves faster than its predecessors. The explosive cliff-hanger ending—also now something of a trademark—promises one final return to the series. — Booklist