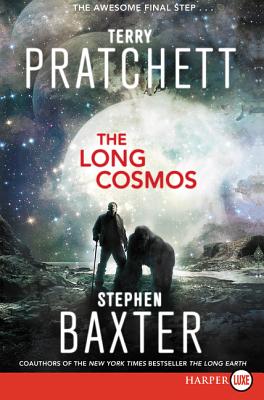 The thrilling conclusion to the internationally bestselling Long Earth series explores the greatest question of all: What is the meaning of life?

2070-71. Nearly six decades after Step Day, a new society continues to evolve in the Long Earth. Now, a message has been received: “Join us.”

The Next—the hyper-intelligent post-humans—realize that the missive contains instructions for kick-starting the development of an immense artificial intelligence known as The Machine. But to build this computer the size of an Earth continent, they must obtain help from the more populous and still industrious worlds of mankind.

Meanwhile, on a trek in the High Meggers, Joshua Valienté, now nearing seventy, is saved from death when a troll band discovers him. Living among the trolls as he recovers, Joshua develops a deeper understanding of this collective-intelligence species and its society. He discovers that some older trolls, with capacious memories, act as communal libraries, and live on a very strange Long Earth world, in caverns under the root systems of trees as tall as mountains.

Valienté also learns something much more profound . . . about life and its purpose in the Long Earth: We cultivate the cosmos to maximize the opportunities for life and joy in this universe, and to prepare for new universes to come.

Sir Terry Pratchett was the internationally bestselling author of more than thirty books, including his phenomenally successful Discworld series. His young adult novel, The Amazing Maurice and His Educated Rodents, won the Carnegie Medal, and Where's My Cow?, his Discworld book for “readers of all ages,” was a New York Times bestseller. His novels have sold more than seventy five million (give or take a few million) copies worldwide. Named an Officer of the British Empire “for services to literature,” Pratchett lived in England. He died in 2015 at the age of sixty-six.

Stephen Baxter is an acclaimed, multiple-award-winning author whose many books include the Xeelee Sequence series, the Time Odyssey trilogy (written with Arthur C. Clarke), and The Time Ships, a sequel to H. G. Wells's classic The Time Machine. He lives in England.

Praise for The Long Mars: “Panoramic and fascinating...” — Kirkus Reviews on THE LONG MARS

Praise for The Long Earth: “The Long Earth is a brilliant Science Fiction collaboration with Stephen Baxter: a love letter to all Pratchett fans, readers, and lovers of wonder everywhere… This novel is a gift to be shared with anyone who loves to be amazed.” — Io9 on THE LONG EARTH

“Stay tuned for the next episode of a very old-fashioned sf quest yarn (think Jules Verne and 2001) that, since Pratchett is involved, is crammed with scientifically informed amusement.” — Booklist on THE LONG EARTH

“In this thought-provoking collaboration, Pratchett (the Discworld series) and Baxter (Stone Spring) create an infinity of worlds to explore… fascinating premise…” — Publishers Weekly on THE LONG EARTH