The Death of Politics: How to Heal Our Frayed Republic After Trump (Hardcover) 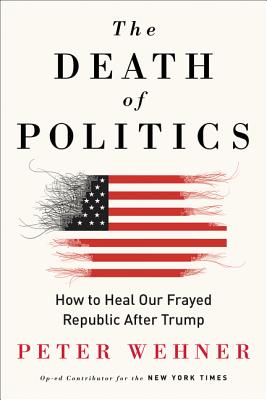 The New York Times opinion writer, media commentator, outspoken Republican and Christian critic of the Trump presidency offers a spirited defense of politics and its virtuous and critical role in maintaining our democracy and what we must do to save it before it is too late.

“Any nation that elects Donald Trump to be its president has a remarkably low view of politics.”

Frustrated and feeling betrayed, Americans have come to loathe politics with disastrous results, argues Peter Wehner. In this timely manifesto, the veteran of three Republican administrations and man of faith offers a reasoned and persuasive argument for restoring “politics” as a worthy calling to a cynical and disillusioned generation of Americans.

Wehner has long been one of the leading conservative critics of Donald Trump and his effect on the Republican Party. In this impassioned book, he makes clear that unless we overcome the despair that has caused citizens to abandon hope in the primary means for improving our world—the political process—we will not only fall victim to despots but hasten the decline of what has truly made America great. Drawing on history and experience, he reminds us of the hard lessons we have learned about how we rule ourselves—why we have checks and balances, why no one is above the law, why we defend the rights of even those we disagree with.

Wehner believes we can turn the country around, but only if we abandon our hatred and learn to appreciate and honor the unique and noble American tradition of doing “politics.” If we want the great American experiment to continue and to once again prosper, we must once more take up the responsibility each and every one of us as citizens share.

PETER WEHNER is a New York Times contributing Op-Ed writer covering American politics and conservative thought and a popular media commentator on politics. He is also a Senior Fellow at the Ethics and Public Policy Center and veteran of three White House administrations.

“Wehner is a model of conscientious political engagement. [The Death of Politics] should be pressed upon both those on the left who believe that the only way to ‘resist’ the current administration is by sinking to its level, and those on the right tempted to wallow in it.”
— New York Times Book Review

“Wehner—who is the successor to [Richard John] Neuhaus in the moral vigor and clarity of his arguments—makes a strong case for civility as an indispensable democratic virtue.”
— Michael Gerson in The Washington Post

“Thoughtful, incisive, and provocative, Peter Wehner’s meditation on where we are—and where we must go—is essential and timely reading. Conservatives need it, but so do all Americans, because whether we like it or not, we are all in this search for a more perfect union together.”
— Jon Meacham, author of The Soul of America

“In these grim political times, Wehner explains how America reached this low point and why Americans should demand more from their leaders. Ultimately a book of hope, The Death of Politics describes public service as a noble calling still capable of improving the lives of forgotten Americans.”

“At a moment when our parties are broken and Washington divided and angry, Pete Wehner offers ways American can have a more civil, productive political conversation.  Agree with his prescriptions or not, the reader will finish this book having met a man of faith, integrity and patriotism.”
— Karl Rove, former Deputy Chief of Staff and Senior Advisor to President George W. Bush

“Like a literary Paul Revere, Pete Wehner raises his lantern in this urgent work, shining a light on the causes of the withering polarization that has seized our democracy—and reminding each of us what we must do to save it.”
— David Axelrod, CNN Senior Political Commentator and former Senior Advisor to Barack Obama

“In these dark and crazy-making days in American politics, Peter Wehner sounds a sober alarm of hope for our divided and discouraged nation. A seasoned political realist and a humble Christian disciple, Wehner clarifies, reminds, rehearses, enjoins, and inspires us to take up our citizenship anew.”
— Mark Labberton, President, Fuller Theological Seminary

“A lifelong conservative and Republican, Peter Wehner makes a powerful case that politics is a noble calling that has been corrupted by Donald Trump. Wehner calls us as citizens to restore politics to its essential place by championing the civic virtues of moderation, compromise and civility. An important book.”
— John C. Danforth, Former Republican U.S. Senator from Missouri

“A participant in one of Plato’s dialogues defines politics as ‘the art of caring for souls.’ That may describe the kind of politics Peter Wehner fears is dying. This book is highly recommended for all who care about the restoration of civility to American politics.”
— Gary Hart, United States Senator (Ret.)

“The Death of Politics is learned, humane, and wise – in short, countercultural! For those despairing at the low state of our civic life, Pete Wehner’s worried, yet not despairing, guidance comes just when it is most needed.”
— Mona Charen, author of Sex Matters and Useful Idiots

“This book, which puts Peter Wehner’s experience as White House insider and journalistic outsider to good use, includes a conservative’s reasoned indictment of President Trump, a moving appeal for public truth-telling, and practical strategies for combining civility with conviction.”
— Mark Noll, editor of Religion and American Politics

“With unflinching honesty and sincere hope, Pete Wehner examines how the body politic of America has fallen so low and how it might regain its place as the hope of the world.”
— Bishop Claude Alexander, The Park Church

“In this important book, Wehner not only reminds us of the virtues necessary to sustain the American experiment, he also offers a timely apologetic for politics. I hope this finds its way into the hands of a younger generation who has yet to see what healthy political deliberation looks like.”


— James K.A. Smith, professor of philosophy, Calvin College and author of You Are What You Love and Awaiting the King

“Wehner—who is the successor to [Richard John] Neuhaus in the moral vigor and clarity of his arguments—makes a strong case for civility as an indispensable democratic virtue.”
— Michael Gerson, The Washington Post

“An inspiring civility and decency in defense of the classical liberalism in which the American constitutional order is rooted, and on behalf of the Christian faith and commitment to family and community that liberal democracy in America enables him to pursue.”
— RealClear Politics

“An incisive new book [on] the ‘death-match mindset’ that characterizes politics today. . . . Wehner still believes that politics can rise to a noble calling ‘to advance justice and human flourishing.’ But that can only happen if we bring back respect for the ‘craft of governing.’”
— Washington Times

“Wehner admits that politics now seems dirty, undignified, corrupt and unprincipled, but he insists that politics remains a noble and necessary calling. Drawing on Aristotle, Locke and Lincoln, Wehner urges a restoration of moderation, compromise and civility. He doesn’t mind if such values seem old-fashioned — just don’t call them weak.”
— The Washington Post