Together We Rise: Behind the Scenes at the Protest Heard Around the World (Hardcover) 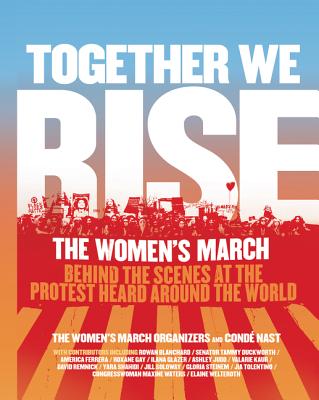 In celebration of the one-year anniversary of Women’s March, this gorgeously designed full-color book offers an unprecedented, front-row seat to one of the most galvanizing movements in American history, with exclusive interviews with Women’s March organizers, never-before-seen photographs, and essays by feminist activists.

On January 21, 2017, the day after Donald J. Trump’s inauguration, more than three million marchers of all ages and walks of life took to the streets as part of the largest protest in American history. In red states and blue states, in small towns and major urban centers, from Boise to Boston, Bangkok to Buenos Aires, people from eighty-two countries—on all seven continents—rose up in solidarity to voice a common message: Hear our voice.

It became the largest global protest in modern history.

Compiled by Women’s March organizers, in partnership with Condé Nast and Glamour magazine Editor in Chief Cindi Leive, Together We Rise—published for the one-year anniversary of the event—is the complete chronicle of this remarkable uprising. For the first time, Women’s March organizers—including Bob Bland, Cassady Fendlay, Sarah Sophie Flicker, Janaye Ingram, Tamika Mallory, Paola Mendoza, Carmen Perez, and Linda Sarsour —tell their personal stories and reflect on their collective journey in an oral history written by Jamia Wilson, writer, activist and director of The Feminist Press. They provide an inside look at how the idea for the event originated, how it was organized, how it became a global movement that surpassed their wildest expectations, and how they are sustaining and building on the widespread outrage, passion, and determination that sparked it.

Together We Rise interweaves their stories with "Voices from the March"—recollections from real women who were there, across the world—plus exclusive images by top photographers, and 22 short, thought-provoking essays by esteemed writers, celebrities and artists including Rowan Blanchard, Senator Tammy Duckworth, America Ferrera, Roxane Gay, Ilana Glazer, Ashley Judd, Valarie Kaur, David Remnick, Yara Shahidi, Jill Soloway, Jia Tolentino, Congresswoman Maxine Waters, and Elaine Welteroth. An inspirational call to action that reminds us that together, ordinary people can make a difference, Together We Rise is an unprecedented look at a day that made history—and the beginning of a resistance movement to reclaim our future.

Women’s March will share proceeds from Together We Rise with three grassroots, women-led organizations: The Gathering for Justice, SisterSong Women of Color Reproductive Justice Collective, and Indigenous Women Rise.

The mission of Women’s March is to harness the political power of diverse women and their communities to create transformative social change. Women’s March is a women-led movement providing intersectional education on a diverse range of issues and creating entry points for new grassroots activists & organizers to engage in their local communities through trainings, outreach programs and events. Women’s March is committed to dismantling systems of oppression through nonviolent resistance and building inclusive structures guided by self-determination, dignity and respect.

“We stood together, using our collective voice as a clear act of resistance. The Women’s March showed the world and now this book amplifies the message: We will not be silenced.”
— Tracee Ellis Ross

“The voices in these pages are the voices of the next generation of progressive leaders, and we would all do well to heed their words.”
— Cecile Richards, President, Planned Parenthood Federation of America

“A robust reverie of resistance. A reminder of the clarion call to action—that was answered with a roar.”
— Ava DuVernay

“Proof of the unequivocal power of mothers, grandmothers, and all women coming together so that every woman can thrive. This book inspires us all to resist, persist, and enlist!”
— Kristin Rowe-Finbeiner, CEO, MomsRising.org

“A testament to the power of women, a rousing reflection on the effort required to stir millions of people across every state in the country and on seven continents to raise voices and challenge a new administration they believed threatened their fundamental rights.”
— USA Today

“Includes a rich collection of images from women’s marches from across the globe […] A work that resists developing a single authoritative account of the march and instead shares a multitude of stories and images that together become a whole. VERDICT This book will lend itself to casual browsing as well as a more serious study of successful, intersectional grassroots organizing.”
— Library Journal