Homewreckers: How a Gang of Wall Street Kingpins, Hedge Fund Magnates, Crooked Banks, and Vulture Capitalists Suckered Millions Out of Their Homes and Demolished the American Dream (Paperback) 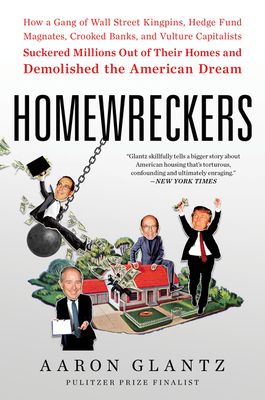 Homewreckers: How a Gang of Wall Street Kingpins, Hedge Fund Magnates, Crooked Banks, and Vulture Capitalists Suckered Millions Out of Their Homes and Demolished the American Dream (Paperback)

“[I] can’t recommend this joint enough. ... An illuminating and discomfiting read.” —Ta-Nehisi Coates

A shocking, heart-wrenching investigation into America’s housing crisis and the modern-day robber barons who are making a fortune off the backs of the disenfranchised working and middle class—among them, Donald Trump and his inner circle.

Two years before the housing market collapsed in 2008, Donald Trump looked forward to a crash: “I sort of hope that happens because then people like me would go in and buy,” he said. But our future president wasn’t alone. While millions of Americans suffered financial loss, tycoons pounced to heartlessly seize thousands of homes—their profiteering made even easier because, as prize-winning investigative reporter Aaron Glantz reveals in Homewreckers, they often used taxpayer money—and the Obama administration’s promise to cover their losses.

In Homewreckers, Glantz recounts the transformation of straightforward lending into a morass of slivered and combined mortgage “products” that could be bought and sold, accompanied by a shift in priorities and a loosening of regulations and laws that made it good business to lend money to those who wouldn’t be able to repay. Among the men who laughed their way to the bank: Trump cabinet members Steve Mnuchin and Wilbur Ross, Trump pal and confidant Tom Barrack, and billionaire Republican cash cow Steve Schwarzman. Homewreckers also brilliantly weaves together the stories of those most ravaged by the housing crisis. The result is an eye-opening expose of the greed that decimated millions and enriched a gluttonous few.

Aaron Glantz is a journalist at Reveal. His work has sparked more than a dozen Congressional hearings, numerous laws, and criminal probes by the DEA, FBI, Pentagon and Federal Trade Commission. A two-time Peabody Award-winner, finalist for the Pulitzer Prize, multiple Emmy nominee, and winner of the Selden Ring and Alfred I. duPont-Columbia Award, his work has appeared in New York Times, Chicago Tribune, NBC Nightly News, Good Morning America and the PBS NewsHour. His previous books include The War Come Home and How America Lost Iraq. He lives in San Francisco.

“With prose that is as plainspoken as it is propulsive, Glantz explains how homeownership propelled the American Dream until 1986 only to fall, one financial scheme at a time, at the hands of billionaire money-grabbers and the failing regulators and gutless politicians who enable them.”
— Beth Macy, author of Dopesick: Dealers, Doctors, and the Drug Company that Addicted America

“In case there was ever any doubt that the world of high finance affects American households, Aaron Glantz lays it to rest in this gripping narrative of how the foreclosure machine became a grand mechanism to convert America’s historic wealth building asset—its homes—into a commodity for financiers.”
— Sarah Bloom Raskin, former deputy secretary of the US Treasury and former governor of the Federal Reserve Board

“An eye-opening account of how a cast of characters from Wall Street to Hollywood enriched themselves at the expense of American families. Glantz weaves together personal stories, historical context, and sharp and insightful analysis of how financiers created predatory products that wreaked devastation on the US economy and… countless families.”
— Mehrsa Baradaran, professor of law at the University of California, Irvine School of Law

“Glantz, through exemplary journalism, reveals the new corporate landlords’ relationship to Donald Trump and their exploitation of loopholes in public policy, in combination with the endless resources of greedy bankers, to transform the 2008 foreclosure crisis into predatory renting schemes and cash in on widespread housing insecurity.”
— Keeanga-Yamahtta Taylor, author of Race for Profit: How Banks and the Real Estate Industry Undermined Black Homeownership

“This is a story that needs to be told, and Glantz tells it beautifully. Homewreckers reads like a novel, but it carries an important message: We must never let this happen again.”
— Alan S. Blinder, Gordon S. Rentscher Professor of Economics and Public Affairs, Princeton University, former member of the Council of Economic Advisers, Vice Chairman of the Board of the Federal Reserve System

“In this remarkable book, Aaron Glantz provides a well-researched, highly readable look at one of the nation’s most underreported stories…a must-read for anyone who wants to understand the Great Recession and the role of the voracious financial interests who would go on to put Donald Trump in the White House.”
— Gwenda Blair, author of The Trumps: Three Generations of Builders and a President

“A tale of greed and corruption...A solid, useful exploration of a system that ‘needs substantial, systemic change.’”
— Kirkus Reviews

“Glantz does an excellent job explaining the financial complexities of the housing crisis and its fallout. But the real strength of his book comes from the personal stories he weaves in to illustrate his points…the most surprising stories are those of the homewreckers themselves.”
— BookPage

"A shocking investigation into America's housing crisis. ... A tale of greed and corruption."
— Christiane Amanpour