Overtime: Jim Harbaugh and the Michigan Wolverines at the Crossroads of College Football (Hardcover) 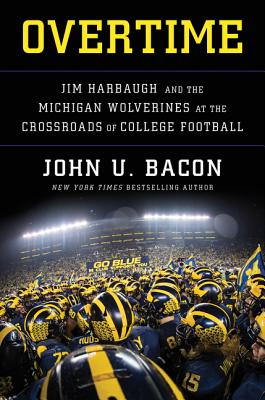 "One of the best insider-football books ever written.” —Douglas Brinkley

A riveting chronicle of Michigan's Jim Harbaugh era, and "an unprecedented look at the inner workings" (Sporting News) of a big-time college football program

For the past year, John U. Bacon has received rare access to Jim Harbaugh’s University of Michigan football team: coaches, players, and staffers, in closed-door meetings, locker rooms, meals, and classes. Overtime captures this storied program at the crossroads, as the sport’s winningest team battles to reclaim its former glory. But what if the price of success today comes at the cost of your soul? Do you pay it, or compete without compromising?

In the spirit of HBO’s Hardknocks, Overtime delivers a deeply reported human portrait that follows the Wolverine coaches, players, and staffers through the 2018 season, including Harbaugh, offensive stars Shea Patterson and Karan Higdon, NFL-ready defensive standouts Rashan Gary, Devin Bush Jr., and Chase Winovich, second-stringers striving to find their place on the team, and their parents’ reactions to it all. Bacon met with them every week during a season that saw the Wolverines ride a ten-game winning streak to #4 in the nation, then take a beating at the hands of arch-rival Ohio State, led by controversial coach Urban Meyer, Harbaugh’s foil. Overtime also previews the crucial 2019 campaign ahead.

Above all, this is a human story. In Overtime we not only discover what these public figures are like behind the scenes, we learn what the experience means to them as they go through it – the trials, the triumphs, and the unexpected answers to a central question: Is it worth it?

From the “poet laureate of Michigan football” (according to New York Times’s Joe Drape), and one of the keenest observers of college football, Overtime offers a window into a legendary program and the sport itself that only John U. Bacon could deliver.

John U. Bacon is the author of the national bestseller The Great Halifax Explosion and five bestselling books about college football, including Three and Out, Fourth and Long, Endzone, and Bo’s Lasting Lessons, co-authored with Michigan coach Bo Schembechler. A former feature writer for the Detroit News, his writing has been recognized three times in The Best American Sports Writing series. He appears often on NPR and national television, including ESPN’s 2019 documentary series on college football. He has taught at Northwestern University’s Medill School of Journalism and the University of Michigan. A popular public speaker, he lives in Ann Arbor with his wife and son.

“John U. Bacon’s Overtime is a brilliant look into the wild and wonderful world of U.S. college football. While Bacon’s intense focus is on the Michigan Wolverines, his first-rate storytelling transcends Ann Arbor. This is one of the best insider-football books ever written. Highly recommended!”
— DOUGLAS BRINKLEY, Professor of History at Rice University and author of American Moonshot: John F. Kennedy and the Great Space Race

“John U. Bacon’s writing is essential to anyone who wants to understand how Big Time College Sports works and why it is stuck in our hearts even when it makes us crazy.”
— JOE DRAPE, New York Times sports reporter

“Provide[s] an insider’s look at Michigan’s closely guarded football secrets. ... Overtime—through Bacon’s sleuthing and careful reporting—investigates how college football’s winningest program... is built from the inside out.”
— Forbes

“Buy it. Read it. Appreciate the richness of the reporting, writing, and context.”
— GENE WOJCIECHOWSKI, reporter, ESPN’s College GameDay

“John Bacon is a riveting story-teller on any subject. This book may be about Michigan, but it captures the human, physical and financial challenges of college football nationally. John explores this story—as with everything he does—with enormous heart and enthusiasm. A fun and important read.”
— ROBIN WRIGHT, award-winning author of Rock the Casbah

“Scintillating. … A page-turner. … A must-read. … A pivotal glimpse into … why college football is about so much more than mere wins and losses.”
— WolverinesWire/USA Today Sports

“Bacon’s knowledge and passion for Wolverines’ football is apparent; however, most impressive is the in-depth access he receives to players and coaches. ... A comprehensive look. ... A must-read.”
— Library Journal, STARRED Review

“I’ve read everything John U. Bacon has ever written and I’ve never been bored or disappointed. ... A quick and captivating read—even if your position in Michigan’s football orbit is as an Ohio State fan.”
— Eleven Warriors

“John U. Bacon is simply unmatched at drilling down and capturing the essence of an athletic culture. Turns out he’s also—this is the special sauce of Overtime—the nation’s pre-eminent Harbaughlogist, delivering delightful, telling gems from the life of one of the most intriguing characters in all of sport.”
— AUSTIN MURPHY

“Nobody knows the past and present of Michigan football better than John. His institutional knowledge, dogged reporting, and skillful writing are perfect tools for the task of taking readers inside the Maize & Blue. Overtime is required reading for not only Michigan fans, but all college football fans.’’
— TIM LAYDEN

“This is a must read. As usual John’s writing skills satisfy more than just the fans of the Maize & Blue. I picked it up and couldn’t put it down!”
— TIM BRANDO

“Fans interested in learning more about the crazy amount of work that happens when the cameras aren’t around on Saturdays should check out John U. Bacon’s newest book – another in a long line of thorough and entertaining looks behind the scenes from John U. Bacon.”
— DAN MURPHY

“Bacon spent a year embedded in the program, catching stories you wouldn’t believe. ... It’s certainly the deepest Bacon’s ever gone into Michigan football, and the first [book] to really encompass the scale of the institution. The question Bacon’s answering is the one purportedly closest to Harbaugh’s heart: Is football worth it? [This] is where this book really excels.”
— MGoBlog.com