Jack Tar and the Baboon Watch: A Guide to Curious Nautical Knowledge for Landlubbers and Sea Lawyers Alike (Paperback) 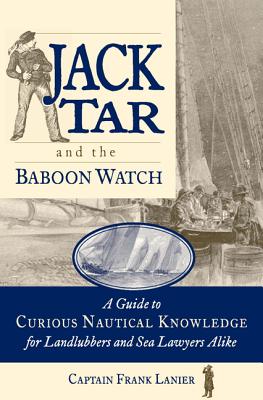 Was the Titanic doomed because of its name? Can you really swallow the anchor?

Jack Tar and the Baboon Watch is a collection of unusual, nautical-based phrases and trivia tidbits for Jack Tars* and landlubbers** alike. Author and mariner Frank Lanier began to compile these entries while serving in the Coast Guard; they were included in the Plan of the Day published aboard the various ships Lanier was stationed on starting in the 1980s. He explains these colorful terms and entertaining phrases in plain language and presents their origins--many of which will surprise you Inside you will find words and phrases . . .

Over a Barrel--Sailors were sometimes tied over a barrel while being flogged. Rummage--A ship's cargo or the packing of it in the vessel's hold, the yardsale-type association of the term arising from the fact damaged cargo was often sold at a rummage sale, a clearing out sale of unclaimed goods at the dock. Rubbernecker--A sailor who stood by and looked on as his shipmates worked. Square Meal--A solid, hearty meal, said to be derived from the square, wooden platters hot meals were served upon aboard ship in good weather. To Fudge It--A sailor's term for a lie, nonsense; exaggeration that can be traced to one Captain Fudge, a seventeenth-century sailor whose propensity for telling outrageous whoppers prompted his crew to meet any tale of dubious origin with a cry of You Fudge It

Dog's Vomit--A moist hash of hardtack biscuits and meat cooked together. Kissed by Mother Carey--Those whose destiny seemed forever tied to the sea. Suck the Monkey--The clandestine siphoning of spirits from one of the ship's casks via a straw or other such tube. Swallow the Anchor--An old salt who retired ashore, forever giving up his life at sea.

With the intriguing Jack Tar and the Baboon Watch, you'll soon be able to talk like a sailor worth his salt

Captain Frank Lanier is a marine surveyor and consultant.