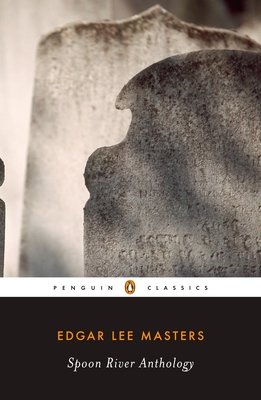 A literary sensation when it appeared in 1915, Spoon River Anthology earned Edgar Lee Masters comparisons to T. S. Eliot and Walt Whitman. The characters who speak here tarnish the pure image of their Midwestern hamlet by holding forth from the grave with tales of illicit love affairs, betrayed confidences, political corruption, and miserable marriages. The first serious work of psychological naturalism, this artful indictment of small-town hypocrisy influenced Theodore Dreiser, William Faulkner, and other luminaries.

Edgar Lee Masters was born in 1868 in Garnett, Kansas, and was raised in several small towns in Illinois. He long harbored literary ambitions but was trained as a lawyer, and practiced for several years in Chicago with Clarence Darrow. Using a variety of pseudonyms to avoid possible damage to his law practice, Masters began to publish poetry in magazines. By 1915 he had published four books of poetry, seven plays, and a collection of essays, but none of them had received much critical attention. Masters then began to experiment with poetic form, bringing to life the sort of people he had known in his Midwestern childhood. The result was Spoon River Anthology, which mixed classical and innovative forms to create a work that critics both praised and scorned for its forthrightness and originality. The book experienced great critical and popular success, and influenced a generation of writers. Although Masters published a sequel to the book and many more works, he never succeeded in producing another volume to match his masterpiece. He died in 1950.