One Flew Over the Cuckoo's Nest: (Penguin Orange Collection) (Paperback) 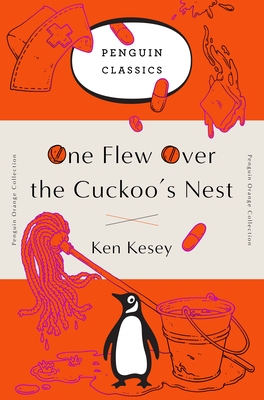 The inspiration for the new Netflix original series Ratched

Part of the Penguin Orange Collection, a limited-run series of twelve influential and beloved American classics in a bold series design offering a modern take on the iconic Penguin paperback

For the seventieth anniversary of Penguin Classics, the Penguin Orange Collection celebrates the heritage of Penguin’s iconic book design with twelve influential American literary classics representing the breadth and diversity of the Penguin Classics library. These collectible editions are dressed in the iconic orange and white tri-band cover design, first created in 1935, while french flaps, high-quality paper, and striking cover illustrations provide the cutting-edge design treatment that is the signature of Penguin Classics Deluxe Editions today.

One Flew Over the Cuckoo’s Nest

Boisterous, ribald, and ultimately shattering, Ken Kesey’s One Flew Over the Cuckoo’s Nest is a seminal novel of the 1960s. Here is the unforgettable story of a mental ward and its inhabitants—a counterculture classic that inspired the 1975 film adaptation, widely considered one of the greatest movies ever made.

Ken Kesey (1935–2001) graduated from the University of Oregon and later studied at Stanford with Wallace Stegner, Malcolm Cowley, Richard Scowcroft, and Frank O’Connor. One Flew Over the Cuckoo’s Nest, his first novel, was published in 1962. His second novel, Sometimes a Great Notion, followed in 1964. His other books include Kesey’s Garage Sale, Demon Box, Caverns (with O. U. Levon), The Further Inquiry, Sailor Song, and Last Go Round (with Ken Babbs). His two children’s books are Little Tricker the Squirrel Meets Big Double the Bear and The Sea Lion.

"A work of genuine literary merit . . . What Mr. Kesey has done in his unusual novel is to transform the plight of a ward of inmates in a mental hospital into a glittering parable of good and evil."
--The New York Times Book Review