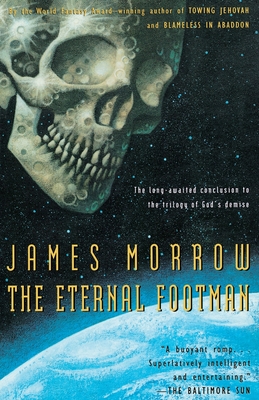 The Eternal Footman completes Morrow's darkly comic trilogy about God's untimely demise. With God's skull in orbit, competing with the moon, a plague of "death awareness" spreads across the Western hemisphere. As the United States sinks into apocalypse, two people fight to preserve life and sanity. One is Nora Burkhart, a schoolteacher who will stop at nothing to save her only son, Kevin. The other is the genius sculptor Gerard Korty, who struggles to create a masterwork that will heal the metaphysical wounds of the age. A few highlights: a bloody battle on a New Jersey golf course between Jews and anti-Semites; a theater troupe's stirring dramatization of the Gilgamesh epic; and a debate between Martin Luther and Erasmus. Morrow also gives us his most chilling villain ever: Dr. Adrian Lucido, founder of a new pagan church in Mexico and inventor of a cure worse than any disease.

James Morrow was born in Philadelphia in 1947. Besides writing, he plays with Lionel electric trains and collects videocassettes of vulgar biblical spectacles.