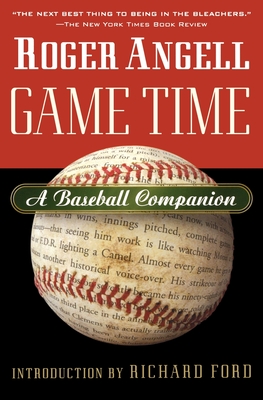 Roger Angell has been writing about baseball for more than forty years . . . and for my money he's the best there is at it," says novelist Richard Ford in his introduction to Game Time. Angell's famous explorations of the summer game are built on acute observation and joyful participation, conveyed in a prose style as admired and envied as Ted Williams's swing. Angell on Fenway Park in September, on Bob Gibson brooding in retirement, on Tom Seaver in mid-windup, on the abysmal early and recent Mets, on a scout at work in backcountry Kentucky, on Pete Rose and Willie Mays and Pedro Martinez, on the astounding Barry Bonds at Pac Bell Park, and more, carry us through the arc of the season with refreshed understanding and pleasure. This collection represents Angell's best writings, from spring training in 1962 to the explosive World Series of 2002.

ROGER ANGELL joined The New Yorker as a fiction editor in 1962. He is the author of seven celebrated baseball books, including Game Time: A Baseball Companion. He lives in New York and Maine.

Steve Kettmann has covered baseball for the San Francisco Chronicle and other publications. He lives in Berlin.

PRAISE FOR GAME TIME
“Roger Angell has an undiminished sense of wonder about a game in
which nothing is predictable except the certainty of surprise.The next
best thing to being in the bleachers, in fact, is savoring accounts of the
sport by this cheerful, consistently quotable scorekeeper.”
—THE NEW YORK TIMES BOOK REVIEW
“Angell is the best baseball essayist around. His relaxed prose glides
across the page with a confident grace that most writers—let alone
baseball writers—would kill for.”—CHICAGO TRIBUNE

"The next best thing to being in the bleachers."

"They have a certain aged, triple-distilled quality: each one has the internal complexity of a novel."