When The Devil Holds The Candle (Inspector Sejer Mysteries) (Paperback) 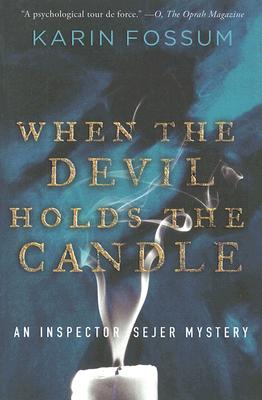 When The Devil Holds The Candle (Inspector Sejer Mysteries) (Paperback)

When two teenagers steal a purse from a stroller, it results in an infant’s death. Unaware of the enormity of their crime, Zipp and Andreas are intent on committing another. They follow an elderly woman home, and Andreas enters her house with his switchblade. In the dark, Zipp waits for his friend to come out.

Inspector Konrad Sejer and his colleague Jacob Skarre see no connection between the infant’s death and the reported disappearance of a local delinquent. And so while the confusion outside mounts, the heart-stopping truth unfolds inside the old woman’s home.

Unflappable as ever, Sejer digs below the surface of small- town tranquility in an effort to understand how and why violence destroys everyday lives.

KARIN FOSSUM is the author of the internationally successful Inspector Konrad Sejer crime series. Her recent honors include a Gumshoe Award and the Los Angeles Times Book Prize for mystery/thriller. She lives in Norway.

PRAISE FOR HE WHO FEARS THE WOLF
"A superb writer of psychological suspense . . . In spare, incisive prose, [Fossum] turns a conventional police procedural into a sensitive examination of troubled minds and a disturbing look at the way society views them."--THE NEW YORK TIMES BOOK REVIEW

PRAISE FOR DON'T LOOK BACK
"A stunning U.S. debut from a European standout . . . Rarely in a modern novel are the characters so vividly rendered . . . The plotting is flawless."--THE PLAIN DEALER (Cleveland)
—