The Oxford Anthology of English Poetry: Spenser to Crabbe (Paperback) 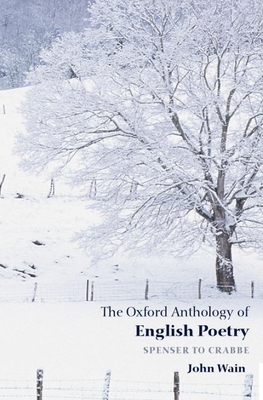 The Oxford Anthology of English Poetry: Spenser to Crabbe (Paperback)

Out of Print
This welcome two-volume reissue of John Wain's classic anthologies celebrates four centuries of English poetry from the Elizabethan era to the present.
Beginning with the English Renaissance poet Edmund Spenser, the collection progresses through the periods of metaphysical poets such as Donne and Marvell, Augustans such as Dryden and Pope, Victorians such as Tennyson and Browning, and World War I poets such as Sassoon and W.H. Auden. In addition,
the anthology includes the works of contemporary poets, featuring Seamus Heaney, Anne Stevenson, Peter Levi, and Ted Hughes, among many others. The result is a rich and varied portrait of the poetry of the ages--comic and dramatic, conventional and unconventional--that is enhanced by works of the
less well-known poets. A beautiful record of Britain and Ireland's verbal heritage, this work will delight all poetry lovers.
John Wain, 1925-94, was an English novelist and critic. He served as professor of poetry at Oxford (1973-8) and wrote or edited more than seventy books. His works include the novels A Winter in the Hills (1970) and The Pardoner's Tale (1978); Letters to Five Artists (1969), poems; and criticalstudies of Arnold Bennett (1967) and Samuel Johnson (1975).