Freedom Riders: 1961 and the Struggle for Racial Justice (Hardcover) 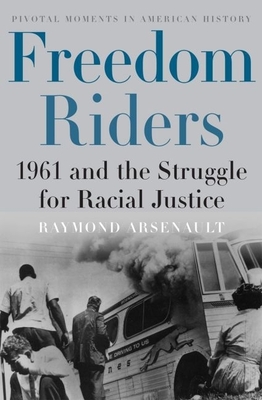 Here is the definitive account of a dramatic and indeed pivotal moment in American history, a critical episode that transformed the civil rights movement in the early 1960s.
Raymond Arsenault offers a meticulously researched and grippingly written account of the Freedom Rides, one of the most compelling chapters in the history of civil rights. Arsenault recounts how in 1961, emboldened by federal rulings that declared segregated transit unconstitutional, a group of volunteers--blacks and whites--traveled together from Washington DC through the Deep South, defying Jim Crow laws in buses and terminals, putting their bodies and their lives on the line for racial justice. The book paints a harrowing account of the outpouring of hatred and violence that greeted the Freedom Riders in Alabama and Mississippi. One bus was disabled by Ku Klux Klansmen, then firebombed. In Birmingham and Montgomery, mobs of white supremacists swarmed the bus stations and battered the riders with fists and clubs while local police refused to intervene. The mayhem in Montgomery was captured by news photographers, shocking the nation, and sparking a crisis in the Kennedy administration, which after some hesitation and much public outcry, came to the aid of the Freedom Riders. Arsenault brings the key actors in this historical drama vividly to life, with colorful portraits of the Kennedys, Jim Farmer, John Lewis, Diane Nash, Fred Shuttlesworth, and Martin Luther King, Jr. Their courage, their fears, and the agonizing choices made by all these individuals run through the story like an electric current.
The saga of the Freedom Rides is an improbable, almost unbelievable story. In the course of six months, some four hundred and fifty Riders expanded the realm of the possible in American politics, redefining the limits of dissent and setting the stage in the years to come for the 1963 Birmingham demonstrations, Freedom Summer and the Selma-to-Montgomery March. With characters and plot lines rivaling those of the most imaginative fiction, this is a tale of heroic sacrifice and unexpected triumph.

Raymond Arsenault is the John Hope Franklin Professor of Southern History and co-director of the Florida Studies Program at the University of South Florida, St. Petersburg. A graduate of Princeton and Brandeis, he is the author of two prize-winning books and numerous articles on race, civil rights, and regional culture.