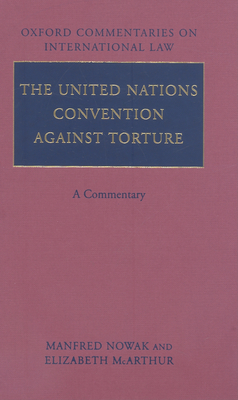 By Manfred Nowak, Elizabeth McArthur
$305.00
Email or call for price.

The prohibition of torture- the right to physical and mental integrity- is guaranteed in the strongest terms under international law. It is protected as an absolute right, non-derogable even in times of war or public emergency. The problem of torture resurfaced in the second half of the 20th Century, and more recently in the contexts of the war in Iraq, the situation of detainees in Guantanamo Bay, and of attempts to extradite persons considered to be 'threats to national security' to States where they may be at risk of torture. The main instrument to combat torture within the framework of the United Nations is the Convention against Torture and other Cruel, Inhuman, or Degrading Treatment or Punishment (CAT). It is one of the few human rights treaties which makes explicit use of criminal law in order to prevent and eradicate violations- the main obligation of States parties to the CAT is to ensure that all acts of torture are offences under domestic criminal law and that punishments are appropriate to the grave nature of such crimes. The CAT even goes beyond the traditional principles of territorial and personal jurisdiction and for the first time applies the principle of universal jurisdiction under a human rights treaty. This volume explores the problematic definition of torture in the Convention, the substantive obligations of Sates parties, the principle of 'non-refoulement', provisions for international monitoring, and the concept of preventative visits to all places of detention as contained in the Optional Protocol to the CAT. It also covers issues including the distinction between torture and cruel inhuman or degrading treatment and the principle of non-admissibility of evidence extracted under torture. Full article by article commentary on the Convention also provides historical context and thorough analysis of case-law and practice from international and regional courts and monitoring bodies. Relevant case-law from domestic courts (such as that of the House of Lords in the Pinochet case) and the practices of domestic prison inspection panels are also discussed.