The Occupiers: The Making of the 99 Percent Movement (Hardcover) 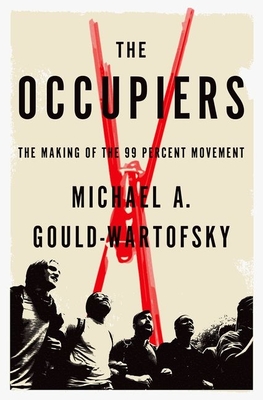 Occupy Wall Street burst onto the stage of history in the fall of 2011. First by the tens, then by the tens of thousands, protestors filled the streets and laid claim to the squares of nearly 1,500 towns and cities, until, one by one, the occupations were forcibly evicted.

In The Occupiers, Michael Gould-Wartofsky offers a front-seat view of the action in the streets of New York City and beyond. Painting a vivid picture of everyday life in the square through the use of material gathered in the course of two years of on-the-ground investigation, Gould-Wartofsky traces the occupation of Zuccotti Park--and some of its counterparts across the United States and around the world--from inception to eviction. He takes up the challenges the occupiers faced, the paradoxes of direct democracy, and the dynamics of direct action and police action and explores the ways in which occupied squares became focal points for an emerging opposition to the politics of austerity, restricted democracy, and the power of corporate America.

Much of the discussion of the Occupy phenomenon has treated it as if it lived and died in Zuccotti Park, but Gould-Wartofsky follows the evicted occupiers into exile and charts their evolving strategies, tactics, and tensions as they seek to resist, regroup, and reoccupy. Displaced from public spaces and news headlines, the 99 Percent movement has spread out from the financial centers and across an America still struggling to recover in the aftermath of the crisis. Even if the movement fails to achieve radical reform, Gould-Wartofsky maintains, its offshoots may well accelerate the pace of change in the United States in the years to come.

Michael Gould-Wartofsky is a PhD candidate in Sociology at New York University, and holds a BA in Government from Harvard University. Gould-Wartofsky was one of the first social scientists on the ground at Occupy Wall Street on Sept 17, 2011, beginning his inquiry then and continuing uninterruptedever since. He has written for The Nation, Monthly Review, Salon, and Mother Jones.