Plague Years: A Doctor’s Journey through the AIDS Crisis (Hardcover) 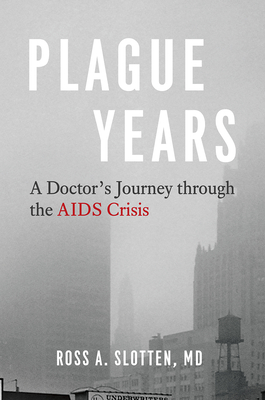 In 1992, Dr. Ross A. Slotten signed more death certificates in Chicago—and, by inference, the state of Illinois—than anyone else. As a family physician, he was trained to care for patients from birth to death, but when he completed his residency in 1984, he had no idea that many of his future patients would be cut down in the prime of their lives. Among those patients were friends, colleagues, and lovers, shunned by most of the medical community because they were gay and HIV positive. Slotten wasn’t an infectious disease specialist, but because of his unique position as both a gay man and a young physician, he became an unlikely pioneer, swept up in one of the worst epidemics in modern history.

Plague Years is an unprecedented first-person account of that epidemic, spanning not just the city of Chicago but four continents as well. Slotten provides an intimate yet comprehensive view of the disease’s spread alongside heartfelt portraits of his patients and his own conflicted feelings as a medical professional, drawn from more than thirty years of personal notebooks. In telling the story of someone who was as much a potential patient as a doctor, Plague Years sheds light on the darkest hours in the history of the LGBT community in ways that no previous medical memoir has.

Ross A. Slotten is a family practitioner specializing in the care of people with HIV/AIDS. He lives in Chicago with his husband and is the author of The Heretic in Darwin’s Court: The Life of Alfred Russel Wallace.

“Plague Years is a remarkable book. At once the story of a disease and a very personal and reflective memoir, 200-some pages written in a powerful narrative style at once artful and enlightening. . . .There are many truths in this stunning and important book. And there’s also hope.”
— Rick Kogan

"This medical memoir will be welcomed as a timely and thought-provoking read."
— Choice

“Slotten’s memoir of caring for AIDS patients in Chicago in the 1980s and 1990s, Plague Years, could not be more timely. . . . San Francisco and New York City have long been cast as the epicenters of the AIDS epidemic, but Slotten provides a history of another major urban center coming to grips with an illness that was unexpected and misunderstood. . . .He is unflinching in examining his own psychology, the mechanisms he erected to protect himself, articulating his sense of deficiency in a bracing confessional tone. . . What loudly echoes from Slotten’s account is the commitment of caregivers to confront the uncertainty of a contagious disease.”
— Jerome Groopman

“A tense reading experience. Indeed the entire story of [Slotten’s] love for a man who broke his heart sets us up for many pages of suspense. This story is woven in with memories of his young adulthood and middle years spent medically caring for AIDS patients, particularly gay men. As he comes to terms with his own advice to get tested—something he had avoided doing himself—readers may feel as if they’re holding onto a fraying rope.”
— Terri Schlichenmeyer

“Slotten recounts his experience in the clinic with acuity and sensitivity. . . . Plague Years is thus a clinical story that is layered with emotional depth and personal detail, as he grapples with both medical and personal crises. The result is captivating and transformative.”
— Cleveland Review of Books

“A heartfelt meditation on a time many thought they'd never see their way through-and a self-critical look at how he got through it. . . . As the public waits for medical miracles to crush the coronavirus, Slotten's words provide a glimmer of hope.”
— Jewish United Fund News

"This is a devastating book, made more so by Slotten's viewpoint as both gay man and doctor, and by casual reminders of the things we didn't know then, and the things we know now. 'Plague Years' is profane and blunt and nail-biting and heartbreaking and hopeful, and that pretty much covers it."
— The Meridian Star

“A plainspoken memoir of the AIDS onslaught by a doctor whose life and career have been spent fighting back at it, Plague Years is humane, harrowing, and—eventually, mercifully, guardedly—hopeful. It was not an easy thing for me to return to the Chicago of those early years of increasing anxiety and fear—who knows how many times Dr. Slotten and I may have unknowingly crossed paths?—but this is an important account, and well worth your time.”
— Benjamin Dreyer, New York Times best-selling author of Dreyer’s English

“An excellently written, eminently readable, and absolutely compelling account of the AIDS epidemic, told with passion from the inside. Slotten vividly brings to life the stories of individuals lost to history and memory, as well as the experience of being a doctor on the frontline of something he never expected to encounter.”
— John D’Emilio, author of Queer Legacies: Stories from Chicago’s LGBTQ Past

“Plague Years could have been written only by a highly observant and deeply thoughtful firsthand witness, reporting the most intimate and honest moments between a physician and his patients. A moving memoir of a gay doctor’s life during the most horrific years of the AIDS epidemic as well as an insightful and detailed historical document.”
— Sean Strub, founder of POZ magazine and director of The Sero Project