Understanding Iran: Everything You Need to Know, From Persia to the Islamic Republic, From Cyrus to Khamenei (Paperback) 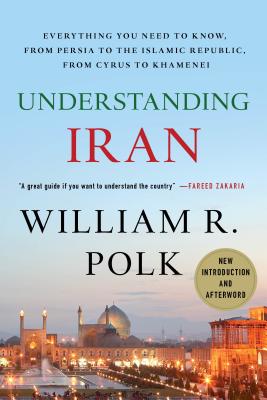 Understanding Iran: Everything You Need to Know, From Persia to the Islamic Republic, From Cyrus to Khamenei (Paperback)

William R. Polk provides an informative, readable history of a country which is moving quickly toward becoming the dominant power and culture of the Middle East. A former member of the State Department's Policy Planning Council, Polk describes a country and a history misunderstood by many in the West. While Iranians chafe under the yolk of their current leaders, they also have bitter memories of generations of British, Russian and American espionage, invasion, and dominance. There are important lessons to be learned from the past, and Polk teases them out of a long and rich history and shows that it is not just now, but for decades to come that an understanding of Iran will be essential to American safety and well-being.

William R. Polk established the Center for Middle Eastern Studies at the University of Chicago, was president of the Adlai Stevenson Institute of International Affairs, and helped to organize the “Table Ronde” meeting that laid the groundwork for the European Union. He is the author of Understanding Iran. He was called back to the White House briefly during the 1967 Middle Eastern War to write a draft Peace Treaty and to act as advisor to U.S. National Security Advisor McGeorge Bundy.

"...A great guide if you want to understand Iran." —Fareed Zakaria

“William Polk has written a superb and insightful historical account of Iran and the evolution of the Persian culture. This should be required reading not just for all those involved in Iranian policy making but for all those interested in understanding this critical nation and society.” —General Anthony C. Zinni USMC (Retired), co-author of Leading the Charge and The Battle for Peace

“Essential reading...a study of depth and clarity.” —Terrell Arnold, former chairman of the Department of International Studies at the U.S. National War College

“This is an easy read with a very big payoff -- a nuanced understanding of Iran as a complex society whose perceptions and politics are shaped by readily comprehensible history, religious traditions, and recent experience. Polk's writing is erudite but not academic; his prose is lucid and his policy experience shows. If you know someone in the United States government dealing with Iran or the Middle East, give that person this book; the prospects of American policy success vis-à-vis both could go up considerably.” —Ambassador Chas W. Freeman, Jr. (USFS, Ret.), former assistant secretary of defense for international security affairs

“The great value of Bill Polk's books is that they take a thoughtful, clear-eyed look at America's entanglement in the Middle East. Understanding Iran is the latest addition to the library of Polk's sharp, smart analysis of a region that America doesn't understand well enough. There are scoops in this book about how close the United States has come to war with the Islamic Republic. But more, there is a deep understanding of Iran, its history and its culture. He tells a story that anyone who cares about America and Iran should read.” —David Ignatius, columnnst for the Washington Post and author of "The Increment."

“Engrossing and penetrating. A beautifully written vision of the other which we desperately need.” —William H. McNeill, former president of the American Historical Association and chairman of the History Department of the University of Chicago.

“Understanding Iran fully lives up to the promise of its title, giving us a thorough yet lively survey of a society that is moving quickly toward becoming the dominant power in the region. He reminds us that as much as Iranians chafe under the yoke of their current leaders, they still have bitter memories of generations of British, Russian and American espionage, invasion and dominance. There are important lessons to be learned from the mistakes of the past, and Polk teases them out of Iran's long, rich history. In the process, he makes a strong case that it is not just now, but for decades to come that a true understanding of Iran will be essential.” —Former ambassador Robert V. Keeley, Five and Ten Press

“A digestible history of this tortured land is something Americans sorely need....And Polk carefully constructs one.” —USA Today on Understanding Iraq

“This book will be informative to two groups scarcely on speaking terms: the supporters of President Bush's invasion of Iraq and those implacably opposed to it....William Polk presents the reader with the full sweep of Iraq's history....He gives us a comprehensive tour.” —Washington Times on Understanding Iraq

“Haunting....One of the clearest prescriptions for success in Iraq yet to emerge.” —Publishers Weekly on Understanding Iraq