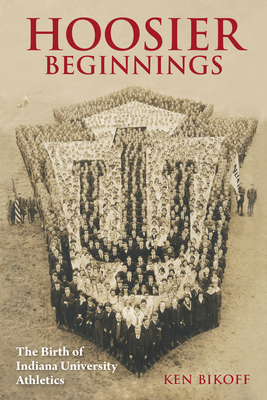 Hoosier Beginnings tells the story of Indiana University athletics from its founding in 1867 to the interwar period. Crammed full of rare images and little-known anecdotes, it recounts how sport at IU developed from its very first baseball team, made up mostly of local Bloomington townsfolks, to the rich and powerful tradition that is the Hoosier legacy.

Hoosier Beginnings uncovers fascinating stories that have been lost to time and showcases how Indiana University athletics built its foundation as a pivotal team in sports history. Learn about the fatal train collision that nearly stopped IU athletics in its tracks; IU's first African American football player; the infamous Baseball Riot of 1913; how a horde of students grabbed axes and chopped down 200 apple trees to make way for a new gymnasium; and the legendary 1910 football team that didn't allow a single touchdown all season--but still lost a game. Most importantly, it attempts to answer the burning question, where did the Hoosiers get their mysterious name?

A graduate of IU's School of Journalism, Kenneth Bikoff worked as a sportswriter for nearly 20 years for publications including Basketball News and Pro Football Weekly. He is currently a Communications Specialist at the Luddy School of Informatics, Computing, and Engineering at Indiana University.