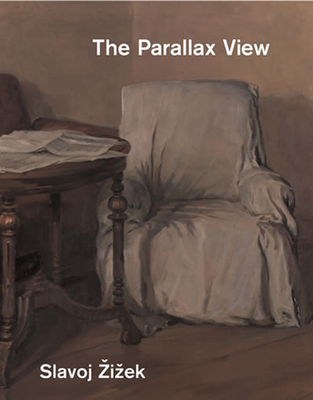 
Usually ships to store in 2-3 Days
In Žižek's long-awaited magnum opus, he theorizes the "parallax gap" in the ontological, the scientific, and the political—and rehabilitates dialectical materialism.

The Parallax View is Slavoj Žižek's most substantial theoretical work to appear in many years; Žižek himself describes it as his magnum opus. Parallax can be defined as the apparent displacement of an object, caused by a change in observational position. Žižek is interested in the "parallax gap" separating two points between which no synthesis or mediation is possible, linked by an "impossible short circuit" of levels that can never meet. From this consideration of parallax, Žižek begins a rehabilitation of dialectical materialism.

Modes of parallax can be seen in different domains of today's theory, from the wave-particle duality in quantum physics to the parallax of the unconscious in Freudian psychoanalysis between interpretations of the formation of the unconscious and theories of drives. In The Parallax View, Žižek, with his usual astonishing erudition, focuses on three main modes of parallax: the ontological difference, the ultimate parallax that conditions our very access to reality; the scientific parallax, the irreducible gap between the phenomenal experience of reality and its scientific explanation, which reaches its apogee in today's brain sciences (according to which "nobody is home" in the skull, just stacks of brain meat—a condition Žižek calls "the unbearable lightness of being no one"); and the political parallax, the social antagonism that allows for no common ground. Between his discussions of these three modes, Žižek offers interludes that deal with more specific topics—including an ethical act in a novel by Henry James and anti-anti-Semitism.

The Parallax View not only expands Žižek's Lacanian-Hegelian approach to new domains (notably cognitive brain sciences) but also provides the systematic exposition of the conceptual framework that underlies his entire work. Philosophical and theological analysis, detailed readings of literature, cinema, and music coexist with lively anecdotes and obscene jokes.

Slavoj Žižek, a philosopher and cultural critic, is Senior Researcher in the Department of Philosophy at the University of Ljubljana, Global Distinguished Professor of German at New York University, and International Director of the Birkbeck Institute for the Humanities at the University of London. He is the author of more than thirty books, including Looking Awry: An Introduction to Jacques Lacan through Popular Culture, The Puppet and the Dwarf: The Perverse Core of Christianity, The Parallax View, The Monstrosity of Christ: Paradox or Dialectic (with John Milbank), and Žižek's Jokes (Did you hear the one about Hegel and negation?), these five published by the MIT Press.
In this huge, thrilling book, Slavoj Žižek enacts a dazzling display of philosophy as performance art, delighting in upsetting readers' expectations, inserting sly jokes, and castigating the 'boring' political analyses of just about everyone....Žižek is a thinker who regards nothing as outside his field: the result is deeply interesting and provocative.—The Guardian—

A remarkable demonstration of continental philosophical and psychoanalytical pyrotechnics. More provocative ideas per page than normally found in whole books by the dull anglophone empiricists who find him so threatening.

No one demonstrates the continued philosophical vitality of Marxism better than Slavoj Žižek.

Žižek has only to clap eyes on a received truth to feel the intolerable itch to deface it....Žižek is that rare breed of writer—one who is both lucid and esoteric. If he is sometimes hard to understand, it is because of the intricacy of his ideas, not because of a self-preening style.

Žižek is one of the few living writers to combine theoretical rigor with compulsive readability, and his new volume provides perhaps the clearest elaboration of his theoretical framework thus far....This challenging book takes us on a roller-coaster ride whose every loop is a Möbius strip.