The Gray Cloth: A Novel on Glass Architecture (Paperback) 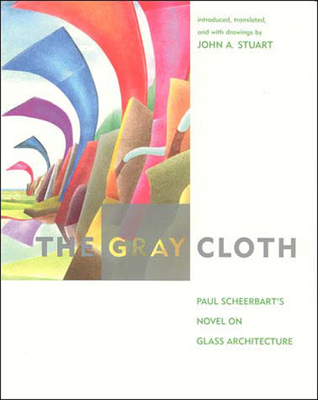 The Gray Cloth: A Novel on Glass Architecture (Paperback)

By Paul Scheerbart, John A. Stuart (Translated by)


Email or call for price
A cult novel, with a critical introduction, by the German expressionist visionary Paul Scheerbart.

The German expressionist, architectural visionary, author, inventor, and artist Paul Scheerbart (1863-1915) wrote several fictional utopian narratives related to glass architecture. In The Gray Cloth, the first of his novels to be translated into English, Scheerbart uses subtle irony and the structural simplicity of a fairy tale to present the theories of colored glass outlined in his well-known treatise Glass Architecture.

The novel is set forward in time to the mid-twentieth century. The protagonist, a Swiss architect named Edgar Krug, circumnavigates the globe by airship with his wife, constructing wildly varied, colored-glass buildings. His projects include a high-rise and exhibition/concert hall in Chicago, a retirement complex for air pilots on the Fiji Islands, the structure for an elevated train across a zoological park in northern India, and a suspended residential villa on the Kuria Muria Islands off the coast of Oman in the Arabian Sea. Fearing that his architecture is challenged by the colorfulness of women's clothing, Krug insists that his wife wear all gray clothing with the addition of ten percent white. This odd demand brings him notoriety and sensationalizes his international building campaign. For the reader, it underlines the confluence of architecture with fashion, gender, and global media.

In his introduction, John Stuart surveys Scheerbart's career and role in German avant-garde circles, as well as his architectural and social ideas. He shows how Scheerbart strove to integrate his spiritual and romantic leanings with the modern world, often relying on glass architecture to do so. In addition to discussing the novel's reception and its rediscovery by contemporary architects and critics, Stuart shows fiction to be a resource for the study of architecture and places The Gray Cloth in the context of German Expressionism.

John A. Stuart is Associate Professor and Director of the Graduate Program in Architecture at Florida International University.

John A. Stuart is Associate Professor and Director of the Graduate Program in Architecture at Florida International University.

John A. Stuart is Associate Professor and Director of the Graduate Program in Architecture at Florida International University.
In The Gray Cloth, Scheerbart shows that even in the most edifying buildings, the human comedy finds a home.—Architecture—

This novel will delight art historians, Brentano fans, and lovers of sophisticated irony.