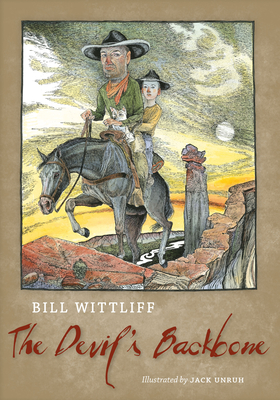 The last the boy Papa saw of his Momma, she was galloping away on her horse Precious in the saddle her father took from a dead Mexican officer after the Battle of San Jacinto, fleeing from his Daddy, Old Karl, a vicious, tight-fisted horse trader. Momma’s flight sets Papa on a relentless quest to find her that thrusts him and his scrappy little dog Fritz into adventures all across the wild and woolly Hill Country of Central Texas, down to Mexico, and even into the realm of the ghostly “Shimmery People.” In The Devil’s Backbone, master storyteller Bill Wittliff takes readers on an exciting journey through a rough 1880s frontier as full of colorful characters and unexpected turns of events as the great American quest novel Adventures of Huckleberry Finn.

Wittliff grew up listening to stories and memories like these in his own family, and in this imaginative novel, they come to vivid life, creating an engrossing story of a Texas Huck Finn that brims with folk wisdom and sly humor. A rogue’s gallery of characters thwart and aid Papa’s path—Old Karl, hell-bent on bringing the boy back to servitude on his farm, and Herman, Papa’s brother who’s got Old Karl’s horse-trading instincts and greed; Calley Pearsall, an enigmatic cowboy with “other Fish to Fry” who might be an outlaw or a trustworthy “o’Amigo”; o’Jeffey, a black seer who talks to the spirits but won’t tell Papa what she has divined about his Momma; Mister Pegleg, a three-legged coyote with whom Papa forms a poignant, nearly tragic friendship; the “Mexkins” Pepe and Peto and their father Old Crecencio, whose longing for his lost family is as strong as Papa’s; and blind Bird, a magical “blue baby” who can’t see with his eyes but who helps other people see what they hold in their hearts. Papa’s adventures draw him ever nearer to a mysterious cave that haunts his dreams—an actual cave that he discovers at last in the canyons of the Devil’s Backbone—but will he find Momma before Old Karl finds him?

Bill Wittliff is a distinguished screenwriter and producer, whose credits include Lonesome Dove, The Perfect Storm, The Black Stallion, and Legends of the Fall, among others. With his wife, Sally, he founded the highly regarded Encino Press and the Wittliff Collections at Texas State University–San Marcos. Wittliff’s fine art photography has been published in the books A Book of Photographs from Lonesome Dove, La Vida Brinca, and Vaquero: Genesis of the Texas Cowboy.

Readers . . . will find themselves entirely transported to a time and place as lyrically surreal as it can be chillingly real.
— Texas Monthly

With his keen ear for language and knowledge of the era, Wittliff employs a vernacular as rich and colorful as Brer Rabbit’s Southern dialect or Huck Finn’s Mississippi Valley argot . . . The readers are rewarded with a lively, almost musical tale.
— Austin American-Statesman