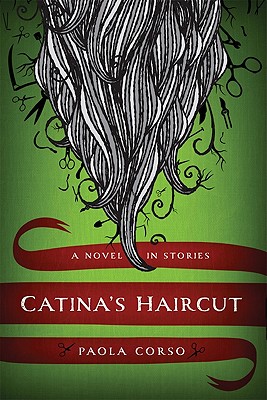 Catina’s Haircut: A Novel in Stories spans four generations of a peasant family in the brutal poverty of post-Unification southern Italy and in an immigrant’s United States. The women in these tales dare to cross boundaries by discovering magical leaps inherent in the landscape, in themselves, and in the stories they tell and retell of family tragedy at a time of political unrest. Through an oral tradition embedded in the stone of memory and the flow of its reinvention, their passionate tale of resistance and transformation courses forward into new generations in a new world.
A woman threatens to join the land reform struggle in her Calabrian hill town, against her husband’s will, during a call for revolution in 1919. A brother and sister turn to the village sorceress in Fascist Italy to bring rain to their father’s drought-stricken farm. In Pittsburgh, new immigrants witness a miraculous rescue during the Great Flood of 1936. A young girl courageously dives into the Allegheny River to save her grandfather’s only memento of the old country. With only broken English to guide her, a widow hops a bus in search of live chickens to cook for Easter dinner in her husband’s memory. An aging woman in the title story is on a quest to cut the ankle-length hair as hard as the rocky soil of Calabria in a drought. A lonely woman who survived World War II bombings in her close-knit village, struggles to find community as a recent immigrant. A daughter visits her mother’s hill town to try and fulfill a wish for her to see the Fata Morgana. These haunting images permeate Corso’s linked stories of loss, hope, struggle, and freedom.

An official selection of The Sons of Italy® Book Club

Paola Corso grew up in the Pittsburgh area. She is a Sherwood Anderson Fiction Award winner, a John Gardner Fiction Book Award finalist, and author of a book of poems, Death by Renaissance, and a collection of stories, Giovanna’s 86 Circles. She lives in Brooklyn, New York.

“Catina’s Haircut taps into deep places of storytelling—collective memory and imagination, folklore and social history—to bring together in one book the Fata Morgana, live chickens, the Risorgimento, and the Pittsburgh Steelers.”—Adria Bernardi, author of Openwork

“Here are important stories of loss and retrieval in an Italian family. Because of Paola Corso’s clear writing, we become witnesses to the courageous and undeniably Italian struggle of the last century’s immigrants and consequently to that constant spark of human spirit in all people.”—Gioia Timpanelli, author of What Makes A Child Lucky

“From the hard, unforgiving soil of Calabria to the congested neighborhood of Pittsburgh’s Bloomfield section, the stories in Catina’s Haircut eloquently present the narrative of the Italian immigrant in America. Corso’s eye is sharp, fiercely honest yet also able to linger over unexpected beauty when it appears in this demanding landscape.”—Hilary Masters, Carnegie Mellon University