The Autobiography of Benjamin Franklin (Paperback) 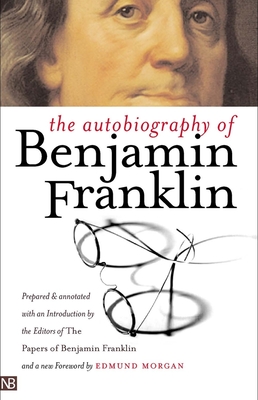 The authoritative edition of Franklin's autobiography, with a foreword by the eminent Franklin scholar Edmund S. Morgan

“The best and most beautiful edition [of the Autobiography].”—J. H. Plumb, New York Review of Books

“Among the many editions available-read Yale's. Its text is the most reliable (the Franklin papers are at Yale) and its supplementary material is uniformly useful.”—Jonathan Yardley, Washington Post

A classic of eighteenth-century American history and literature, Benjamin Franklin's Autobiography has had an influence perhaps unequaled by any other book by an American writer. Written ostensibly as a letter to his son William, Franklin's Autobiography offers his reflections on philosophy and religion, politics, war, education, material success, and the status of women.

Prepared by the editors of The Papers of Benjamin Franklin this definitive edition is drawn with scrupulous care from the original manuscript in Franklin's handwriting now in the Henry E. Huntington Library and Art Gallery. The introduction by Leonard W. Labaree places the autobiography in literary and historical contexts. In a new foreword, eminent Franklin scholar Edmund S. Morgan writes about Franklin's dual allegiance as an American and a subject of an English king—and his emergence as a leader of the American Revolution. This edition also includes biographical notes, a chronology of Franklin's life, and an updated bibliography.

Edmund S. Morgan is Sterling Professor of History Emeritus at Yale University. He is the author of Benjamin Franklin, published by Yale University Press.

"People who have read one or more of the many current books about Benjamin Franklin really ought to direct their attention to the man himself, specifically to The Autobiography of Benjamin Franklin. . . . It is the first great American book. . . . An extraordinary document. . . . Plainly yet vividly written, its 18th-century prose still accessible to ordinary readers more than two centuries later. . . . It portrays Colonial and Revolutionary America . . . with an immediacy unmatched in almost any other document. . . . Franklin's wisdom is for the ages, our own as much as his. So read the 'Autobiography,' and—among the many editions available—read Yale's. Its text is the most reliable (the Franklin papers are at Yale) and its supplementary material is uniformly useful."—Jonathan Yardley, Washington Post

"Where so many fancy books are long on pictures and short on readable reading matter, this one is superbly the reverse . . . what counts here is the text: the first thoroughly edited and adequately annotated version of Franklin's memoirs faithful in every word to Franklin's holograph. . . . The result is like cleaning away the grime and crackled varnish of generations to discover unsuspected sparkle in an old master."—Time

"The best and most beautiful edition [of the Autobiography]."—J. H. Plumb, New York Review of Books

"This is one of those rarest of historiographical achievements: a publication of the original text of a historical and literary classic in which the bookmaker's art and the historian's best technical editorial skill are combined to produce a work that is both a dependable scholar's source, a reader's delight, and a thing of beauty."—American Historical Review