Caesar: Life of a Colossus (Paperback) 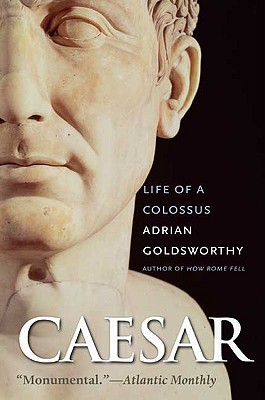 By Adrian Goldsworthy
$22.00
On Our Shelves Now

Named 2006 Best Book of the Year by Amazon.com

“An authoritative and exciting portrait not only of Caesar but of the complex society in which he lived.”—Steven Coates, New York Times Book Review

“The best introduction to Caesar and his world that is currently available.”—Karl Galinsky, Bookforum

Tracing the extraordinary trajectory of the great Roman emperor’s life, Goldsworthy covers not only the great Roman emperor’s accomplishments as charismatic orator, conquering general, and powerful dictator but also lesser-known chapters during which he was high priest of an exotic cult, captive of pirates, seducer not only of Cleopatra but also of the wives of his two main political rivals, and rebel condemned by his own country. Ultimately, Goldsworthy realizes the full complexity of Caesar’s character and shows why his political and military leadership continues to resonate some two thousand years later. In the introduction to his biography of the great Roman emperor, Adrian Goldsworthy writes, “Caesar was at times many things, including a fugitive, prisoner, rising politician, army leader, legal advocate, rebel, dictator . . . as well as husband, father, lover and adulterer.” In this landmark biography, Goldsworthy examines Caesar as military leader, all of these roles and places his subject firmly within the context of Roman society in the first century B.C.

Adrian Goldsworthy read history at Oxford and is the author of The Roman Army at War, The Punic Wars, and other books about the ancient world. He lives in Wales.

"An authoritative and exciting portrait not only of Caesar but of the complex society in which he lived."—Steven Coates, New York Times Book Review

"A rich and remarkably complete panorama of the times and the man. . . . The best introduction to Caesar and his world that is currently available."—Karl Galinsky, Bookforum

"This book makes and insightfully explains the leap from Caesar the soldier and general to Caesar the statesman and nation builder. It's better than any book I've ever read on him, and more incisive."—Wall Street Journal (cited by Leo J. Hindery Jr., CEO of InterMedia Partners VII LLP, as recommended reading of biographies and autobiographies of great leaders for those plotting a career path to the corner office)

"The man who virtually defined the West's concept of leadership comes alive in this splendid biography. Military historian Goldsworthy gives a comprehensive, vigorous account of Caesar's conquest of Gaul and his victories in the civil war that made him master of Rome. But he doesn't stint on the nonmartial aspects of Caesar's life—his dandyism, his flagrant womanizing (which didn't stop enemies from gay-baiting him), his supple political genius and the flair for drama and showmanship that cowed mutinous legionaries and courted Rome's restive masses. Goldsworthy's is a sympathetic profile. . . . More compellingly than most biographies, Goldsworthy's exhaustive, lucid, elegantly written life makes its subject the embodiment of his age."—Publishers Weekly (starred review)

"This is an engaging and well-drawn resource for those who wish to be introduced to the man who was Caesar. . . . Additions to Goldsworthy's text include a chronology of key events, a glossary, and notes. Recommended for academic and larger public libraries."—Library Journal

"Adrian Goldsworthy's new biography, Caesar: Life of a Colossus, succeeds in capturing all the drama and  complexity of this best-known of lives. Mr. Goldsworthy, a prolific young British classicist, has real narrative gifts, as well as an encyclopedic knowledge of late republican Rome. Together, these strengths make Caesar one of  the most fascinating biographies you will come across this year."—Adam Kirsch, New York Sun

"[Goldsworthy] succeeds in returning the man to his time and place and reminds us how it all could have been very different."—Blake D. Dvorak, Washington Times

"Excellent and very readable. . . . Designed for the general reader or a lover of history and [it is a] reading experience of the first order."—David Walton, Milwaukee Journal Sentinel

"Caesar: Life of a Colossus . . . is a superb and absorbing life of the man who came, saw and conquered—and then was murdered for his trouble."—J. Peder Zane, News and Observer

"Noteworthy. . . . Goldsworthy gives a thorough account of Caesar’s military accomplishments as well as painting a vivid portrait of both the man and the power-hungry world he inhabited."—Christian Science Monitor

"Goldsworthy’s deep knowledge of Caesar’s times makes it possible to fill in all sorts of details on education, military affairs, marriage customs, but most of all on the ferocious politics of Caesar’s time. . . . [A] fine biography which brings, in prose which is never pedantic or dull, depth, color and context to his amazing life and interesting times."—John Lisenmeyer, Greenwich Times

"This is an absorbing tale, more exciting than any modern-day mystery or thriller. It has drama, intrigue, affairs, spectacular battles, brilliant politics, and a charismatic central figure. Moreover, it is a solid work that brings to life the rich world of the Mediterranean in the decade before Christ."—Geeta Sharma-Jensen, Milwaukee Journal Sentinel

"Goldsworthy tells Caesar's story with professional detachment, extensive understanding of the institutional and political mechanisms of the late Republic, and proficiency with the Latin and Greek sources. . . . [He] weaves together a rich and engaging narrative that gives full weight to the importance of political, personal, and family obligations that defined the course of Caesar's life. . . . A clear and captivating picture of the man who forever changed Rome."—Daniel Larison, The American Conservative

"Goldsworthy has written an excellent book aimed at readers at all levels, particularly those without extensive background in Roman history. His narrative style is easy, free flowing, and anything but dry. . . . Highly recommended."—Choice

"While classical scholars may have been arguing since the Renaissance about the true character and accomplishments of the Roman general and politician Gaius Julius Caesar, for the past four hundred years educated people around the world have drawn conclusions about him largely from the portrait created by William Shakespeare. . . . As Adrian Goldsworthy demonstrates admirably in Caesar: Life of a Colossus, the real Julius Caesar was a much more complex character. . . . Highly readable."—Laurence W. Mazzeno, Magill's Literary Annual

"Adrian Goldsworthy has produced the definitive modern biography of Julius Caesar. It is an absorbing book about a fasinating personality. . . . This is a great book. It is essentially a mini-history of Rome from 100 to 44 B.C. It reads well and will do nothing but enhance Adrian Goldsworthy's already fine reputation."—J. Boone Bartholomees, Jr., Parameters, US Army War College Quarterly

"A fascinating account of the life and career of a remarkable man. . . . Goldworthy is a sober and cautious biographer, but then, when one's subject is Julius Caesar, one needs to be nothing more."—John Phillips, Southern Humanities Review

"Goldsworthy's book will remain the definitive biography of Caesar for years to come."—Philip Matyszak, author of The Sons of Caesar: Imperial Rome's First Dynasty

"Adrian Goldsworthy is one of our most promising young military historians today."—Sir John Keegan, author of The Iraq War

"Adrian Goldsworthy is one of the new generation of young classicists who combine scholarship with storytelling to bring the ancient world to life. In his masterly new Caesar, he shows us the greatest Roman as man, statesman, soldier, and lover."—Simon Sebag Montefiore, author of Stalin: The Court of the Red Tsar

"Adrian Goldsworthy is one of the new generation of young classicists who combine scholarship with storytelling to bring the ancient world to life. In his masterly new Caesar, he shows us the greatest Roman as man, statesman, soldier, and lover."—Simon Sebag Montefiore, author of Stalin: The Court of the Red Tsar

"Caesar is an accessible, balanced, and highly readable contribution to our understanding of one of Rome's most complex characters. No one writing in English today knows more about Roman military history than Adrian Goldsworthy."—Guy MacLean Rogers, author of Alexander: The Ambiguity of Greatness