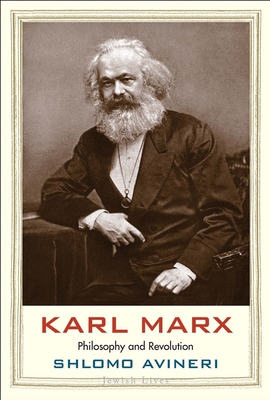 From the prizewinning Jewish Lives series, a new exploration of Karl Marx's life through his intellectual contributions to modern thought

Karl Marx (1818–1883)—philosopher, historian, sociologist, economist, current affairs journalist, and editor—was one of the most influential and revolutionary thinkers of modern history, but he is rarely thought of as a Jewish thinker, and his Jewish background is either overlooked or misrepresented. Here, distinguished scholar Shlomo Avineri argues that Marx’s Jewish origins did leave a significant impression on his work. Marx was born in Trier, then part of Prussia, and his family had enjoyed equal rights and emancipation under earlier French control of the area. But then its annexation to Prussia deprived the Jewish population of its equal rights. These developments led to the reluctant conversion of Marx’s father, and similar tribulations radicalized many young intellectuals of that time who came from a Jewish background.

Avineri puts Marx’s Jewish background in its proper and balanced perspective, and traces Marx’s intellectual development in light of the historical, intellectual, and political contexts in which he lived.

Jewish Lives is a prizewinning series of interpretative biography designed to explore the many facets of Jewish identity. Individual volumes illuminate the imprint of Jewish figures upon literature, religion, philosophy, politics, cultural and economic life, and the arts and sciences. Subjects are paired with authors to elicit lively, deeply informed books that explore the range and depth of the Jewish experience from antiquity to the present.

In 2014, the Jewish Book Council named Jewish Lives the winner of its Jewish Book of the Year Award, the first series ever to receive this award.

Shlomo Avineri is professor emeritus of political science at the Hebrew University of Jerusalem and a member of the Israel Academy of Sciences and Humanities. A leading Israeli political scientist, he is the author of The Socialand Political Thought ofKarl Marx and The Making of Modern Zionism.

"Besides being approachably succinct, Avineri’s sympathetic account is distinguished by its appearance in the highly regarded Jewish Lives series."—James Miller, New York Times

"Mr. Avineri’s treatment of Marx is a perceptive and fair-minded corrective to superficial treatments of the man. . . . [H]ere lies the central strength of this short biography: It tells us what Marx actually wrote."—Jonathan Rose, Wall Street Journal

“In his brisk, approachable book, Avineri, . . . former director-general of Israel’s Ministry of Foreign Affairs, paints a nuanced picture of the development of Marx’s ideas.”—The Forward

"Avineri’s ability to show the reader a changing, learning, Marx while contextualizing him and his work within the 19th century, his peers, as well as our current perceptions about him cannot be captured in snippets here, but also cannot be overstated. This is the greatest strength of the book, especially when he applies it to passages and works of Marx you thought you knew, and makes for a great reading experience."—David Murphy, Open Letters Review

"Avineri’s Marx: Philosophy and Revolution distinguishes itself by approaching Marx from a less familiar angle: Marx’s Jewish heritage and its implications for the development of his philosophical outlook. . . . [A] refreshingly concise biography."—Igor Shoikhedbrod, Marx and Philosophy Review of Books

"Shlomo Avineri . . . a world authority on Marxism, presents a beautifully clear introduction to Marx’s thought and its Hegelian origins. . . . The originality of his book lies in Avineri’s belief that Marx’s Jewish background left large fingerprints on his work."—Vernon Bogdanor, Jewish Chronicle

"A valuable and unique contribution to a growing collection of literature examining the contemporary campus."—Journalism and Mass Communication Quarterly

"It is Avineri’s concern for the complex question of Marx’s identity as a Jew that makes his new biography truly distinctive."—Peter E. Gordon, New Republic

“Shlomo Avineri has written a wonderfully perceptive and nuanced biography of Karl Marx--paying all due attention (but no more than that) to Jewish interests, Marx's and ours. His book is both intellectually and politically engaging--and a pleasure to read.”—Michael Walzer, Institute for Advanced Study, Princeton, NJ