The Washingtons: George and Martha, "Join'd by Friendship, Crown'd by Love" (Hardcover) 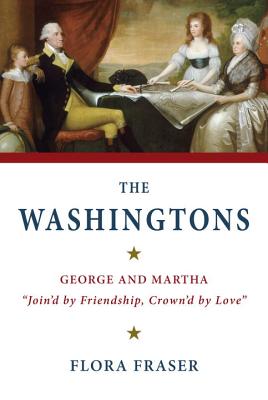 The Washingtons’ long union begins in colonial Virginia in 1759, when George Washington woos and weds Martha Dandridge Parke Custis, a pretty, charming, and very rich young widow. The calm early years of their marriage as plantation owners at Mount Vernon and as parents to Martha’s two children, Jacky and Patsy—both of whom present difficult challenges—yield to harsher times. Washington has been prominent among Virginians in opposing British government measures, and at the outbreak of fighting in 1775 he is elected commander-in-chief of the Continental army. The war sees Martha resolutely supporting her husband, sharing in the hardships at Valley Forge and other wretched winter headquarters. Essential to George’s personal well-being, she is known as “Lady Washington”—a redoubtable and vastly admired figure in her own right.

Flora Fraser provides us with a brilliant account of the public Washington and of the war he waged, and gives us, as well, the domestic Washingtons, whether at Mount Vernon before and during the war or in New York and Philadelphia during his presidency. Even in wartime, Martha manages to scour Philadelphia to find a doll for her newest granddaughter and keeps careful control of her Virginia inheritance. George grapples with a formidable enemy, without proper troops and often without basic supplies—his soldiers frequently lack rations, blankets, even shoes—while always fearful for his wife’s welfare and safety, given the constant worry that the British might descend on Mount Vernon. Even so, a true Virginian, he manages to dance for more than three hours with Alexander Hamilton’s pretty young wife at a makeshift ball.

With victory and the arrival of peace in 1783, the Washingtons hope to remain at home, a hope dashed when, in 1789, George is elected our first president and Martha becomes a faultless first First Lady. During the presidency, they together negotiate the many pitfalls of establishing republican entertainment—the weekly “Congress dinner,” levées, and drawing rooms—before, finally free of official responsibilities after Washington’s second term, they are at last able to retreat to their beloved Mount Vernon.

This is a remarkable story of a remarkable pair as well as a gripping narrative of the birth of a nation—a major, and vastly appealing, contribution to the literature of our founding fathers . . . and founding mother.

FLORA FRASER is author of Beloved Emma: The Life of Emma, Lady Hamilton; The Unruly Queen: The Life of Queen Caroline; Princesses: The Six Daughters of George III; and Pauline Bonaparte: Venus of Empire. She is chair of the Elizabeth Longford Prize for Historical Biography, established in 2003 in affectionate memory of her biographer grandmother. She lives in London.

Praise for Flora Fraser’s
THE WASHINGTONS

“Impressive and highly readable . . . Flora Fraser has added an absorbing portrayal of George and Martha Washington and their extended family to the catalog of books on early American icons.”
-The Missourian

“Smartly written and devoid of gossip and cant . . . a searing look into the private lives of very public men and women.”
-Boston Globe

“In ‘The Washingtons,’ an ambitious, well-researched and highly readable dual biography, Flora Fraser has worked hard, despite the limited documentation that is available, to portray George and Martha, and their extended family, as fully rounded, flesh-and-blood people . . . she has brought the elusive Martha into as clear a focus as we are ever likely to have.”
-Fergus M. Bordewich, The Wall Street Journal

“In The Washingtons, Flora Fraser has provided an insightful portrait in elegant prose with a dash of wit. The book is based on a mastery of the original sources and brings to life, with much imagination, a wonderful marriage in a period of revolution and war. It is written with a light touch, but is a serious account in every respect. This is a book worthy of its subject.”
-Robert Middlekauff, author The Glorious Cause

“Flora Fraser's The Washingtons is a vivid and intimate history of America's first First Family. For those who have ever wondered what George would have been without Martha, and how Martha would have fared without George, this book provides the answer and much else besides. With her usual flair and grace, Fraser proves the old adage that no man is an island, particularly when it comes to achieving great success.
-Amanda Foreman, author of A World on Fire

“In this charmingly insightful dual biography, Flora Fraser makes a compelling case that America’s first First Couple was its first power couple. Martha Washington here emerges from her husband’s historical shadow to reclaim the place she occupied in life as his indispensable collaborator in war and peace. An important story delightfully told.”
-H. W. Brands, author of Reagan