Margaret Thatcher: At Her Zenith: In London, Washington and Moscow (Hardcover) 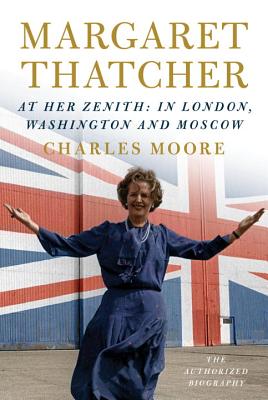 In June 1983 Margaret Thatcher won the biggest increase in a government’s parliamentary majority in British electoral history. Over the next four years, as Charles Moore relates in this central volume of his uniquely authoritative biography, Britain’s first woman prime minister changed the course of her country’s history and that of the world, often by sheer force of will.

The book reveals as never before how Mrs. Thatcher transformed relations with Europe, privatized the commanding heights of British industry and continued the reinvigoration of the British economy. It describes her role on the world stage with dramatic immediacy, identifying Mikhail Gorbachev as “a man to do business with” before he became leader of the Soviet Union, and then persistently pushing him and Ronald Reagan, her great ideological soul mate, to order world affairs according to her vision. For the only time since Churchill, she ensured that Britain had a central place in dealings between the superpowers.

But even at her zenith she was beset by difficulties. Reagan would deceive her during the U.S. invasion of Grenada. She lost the minister to whom she was personally closest to scandal and faced calls for her resignation. She found herself isolated within her own government. She was at odds with the Queen over the Commonwealth and South Africa. She bullied senior colleagues and she set in motion the poll tax. Both these last would later return to wound her, fatally.

Charles Moore has had unprecedented access to all of Mrs. Thatcher’s private and government papers. The participants in the events described have been so frank in interviews that we feel we are eavesdropping on their conversations as they pass. We look over Mrs. Thatcher’s shoulder as she vigorously annotates documents and as she articulates her views in detail, and we understand for the first time how closely she relied on a handful of trusted advisers to carry out her will. We see her as a public performer, an often anxious mother, a workaholic and the first woman in Western democratic history who truly came to dominate her country in her time.

In the early hours of October 12, 1984, during the Conservative party conference in Brighton, the IRA attempted to assassinate her. She carried on within hours to give her leader’s speech at the conference. One of her many left-wing critics, watching her that day, said, “I don’t approve of her as Prime Minister, but by God she’s a great tank commander.” This titanic figure, with all her capabilities and her flaws, storms from these pages as from no other book.

CHARLES MOORE was born in 1956 and educated at Eton and Trinity College, Cambridge, where he read history. He joined the staff of The Daily Telegraph in 1979, and as a political columnist in the 1980s covered several years of Mrs. Thatcher’s first and second governments. He was editor of The Spectator from 1984 to 1990; editor of The Sunday Telegraph from 1992 to1995; and editor of The Daily Telegraph from 1995 to 2003, for which he is still a regular columnist. The first volume of his biography of Margaret Thatcher, published in 2013, has won multiple awards for distinguished achievement in biography and history.

“[A] remarkable achievement….[Moore] writes clearly and honestly, never letting his essentially positive view of Thatcher get in the way of his ‘public interest’ duty to present us with the evidence as he finds it….His mastery of the vast range of topics with which Thatcher herself had to grapple is absolute, his marshaling of evidence adroit, and his judgments deliberate and fair. Moore remains on target to produce the definitive ‘case for the defense’ of this titanic and still controversial figure. His work will very likely stand alongside that of John Morley, official biographer of Gladstone, as one of the masterpieces of British political history.” —Richard Aldous, The New York Times

“Margaret Thatcher was no ordinary politician: She was a force of nature. Any attempt to capture in words a leader so utterly sui generis requires abilities of the highest order. It was not the least of her feats to have found in Charles Moore the ideal biographer. His work not only does justice to her achievements but comes as close as possible to evoking what she was really like. It is not just authorized, but authoritative. Indeed, I venture to say that Mr. Moore’s “Margaret Thatcher” is one of the greatest political biographies ever written.” —Daniel Johnson, The Wall Street Journal

“Moore’s biography is a superb achievement: an authoritative, readable, humane account that reveals some disagreement with Thatcher’s policies but also a thoroughgoing effort to understand her perspective. It is just the right point of view for approaching a polarizing figure….The next volume of Moore’s outstanding biography will be the last. It is sure to be a treat.” —Michael O’Donnell, Chicago Tribune

“Monumental…[Moore] is both sympathetic and balanced, never a sycophant. The first volume of his authorized biography was hailed as masterly. In this volume, too, covering the period of her greatest power, 1982 to 1987, Moore combines massive research, prodigious depth of analysis and fascinating narrative detail….I found it riveting.” —Elaine Showalter, The Washington Post

“One of the many achievements of Charles Moore’s biography of Thatcher is to recall into vivid life not only the British prime minister herself, but the political era to which she gave her name …. Moore writes perceptively and sensitively about what it meant for Thatcher to smash that glass ceiling against which Hillary Clinton bumped so hard in 2008—including the many ways that politics is inescapably, not arbitrarily, different for women than for men….Magnificent.” —David Frum, The Atlantic

“[Moore] is surprisingly evenhanded….readers inclined to be as fair-minded as he will find much of interest in his account of her years in power.” —Kirkus Reviews *starred review*

"Using the abundant and illuminating sources he had full access to, including government and personal papers, private diaries, personal notes, and so much more, Moore creates a carefully detailed portrait of a leader he characterizes as 'more famous on the world stage than any British prime minister except for Sir Winston Churchill.'....A chronology of world events, copious notes, and an extensive bibliography enhance an exhaustive narrative that will fascinate students of contemporary British history and politics." —Booklist

“Hard to put down….This is an excellent book and brings Mrs. Thatcher back into the forefront long after her departure from the political scene. IT is informative and interesting and belongs on the library shelf of anyone who appreciates the intricacies of British politics.” —New York Journal of Books

Praise for Margaret Thatcher: From Grantham to the Falklands:

“A masterpiece of clear and intelligent writing…Margaret Thatcher: From Grantham to the Falklands is already one of the great classic political biographies.” —John O’Sullivan, The Weekly Standard

“It’s an incredible level of access….Margaret Thatcher: From Grantham to the Falklands is the first of two volumes, and it presents a remarkable and richly detailed portrait.” —Craig Fehrman, Boston Globe

“Thatcher was a remarkable politician and Moore does justice to her distinctive qualities.” —David Runciman, London Review of Books

“Moore presents us with enough new material to offer a fresh, even vulnerable person behind the mythology…Moore’s writing is often elegant and vivid, particularly when he escapes the burden of authorized biographer by turning to commentary on Thatcher’s behavior and decisions.” —Jane Merrick, The Independent

“A notable landmark…meticulously researched and gracefully expounded…It is not the only biography to appear so opportunely, but Moore writes with greater freedom, insight, and objectivity…Both ideologically and personally, we now have a better understanding of the remarkable figure who became Britain’s first woman prime minister.” —Peter Clark, Financial Times

“[Moore] is not afraid to address the contradictions and tease out the inconsistencies of his subject. Nor to be critical, sometimes deeply so. The result is to paint a much more multidimensional portrait of Thatcher than the caricature heroine adored by the right or the devil incarnate loathed by the left…The prose is intricate, elegant and laced with dry humor…immensely adds to our knowledge and understanding of the longest-reigning prime minister of the democratic age.” —Andrew Rawnsley, The Observer

“Moore has produced a biography so masterly—so packed with fascinating detail, with such a strong narrative drive, propelled by a central character who is at the same time both very bizarre and very conventional—that it comes as close as biography can come to being a work of art…Friends and foes of Thatcher, and agnostics and sceptics too, will all find plenty on which to feast. On virtually every page there is a revelation that, had it been known at the time, would have blasted all the rest of the news off the front pages…This book is a triumph of diligence. Moore interviewed 315 people, and was clearly blessed with the knack of getting them to open up. Ribald insults, gossip, political secrets, private grievances and funny stories—many of them very, very funny—fly off every page. But it is also a triumph of narrative art and human understanding, at its centre a peculiar force of nature, never to be repeated…one of the greatest political biographies ever written.” —The Daily Mail

“[Moore] has discharged the first part of his commission superbly. He has marshalled a huge range of sources, many of them new, without letting himself be swamped… He has spoken to practically everyone who ever had anything to do with her, and interweaves their recollections skilfully to bring out wider themes… If the second volume, charting her mounting hubris and eventual nemesis, maintains this quality it will be a tremendous achievement.” —John Campbell, The Independent

“Moore’s pace, his fascination, and his command of detail never slacken. This is a masterly piece of work.” —Matthew Parris, The Times

“Charles Moore is the perfect biographer: thorough, empathetic, enquiring, and eloquent. This is the portrayal of a life well-lived, explored in a book well-written.” —Sunday Express

“A life’s work of research and interviewing.” —Independent on Sunday

“An immensely readable account of the greatest political life of the second half of the 20th century.” —Patrick O’Flynn, Daily Express

“It’s hard to imagine anyone, even the most anti-Thatcherite, finding this dull…it sparkles with insight, drama, and wit.” —Daily Mail

“There are, of course, plenty of good books about Mrs. Thatcher. But Moore’s is comfortably the best: indeed, with its elegant prose, dry wit, prodigious research and careful judgments, it is one of the best political biographies I have ever read.” —Dominic Sandbrook, Sunday Times

“Now comes the first volume of an authorized biography that may well turn out to be one of the great lives of modern times…It is not often that you can say of a 900-page book that it leaves you wanting to read more. But in this case it is true.” —The Economist

“Good biographies, and this is an exceptionally good one, tell us things we did not know about the life of their subject.” —New Statesman

“This is not just a good book—it's a great one…What gives this work the edge is not just Moore's deep knowledge of and affection for his subject—it is the sheer amount of work he has done. The number of interviews he has conducted is simply staggering. Yet although huge, it quite dances along and because of his very pronounced sense of the absurd, often makes us laugh out loud.” —A.N. Wilson, London Evening Standard