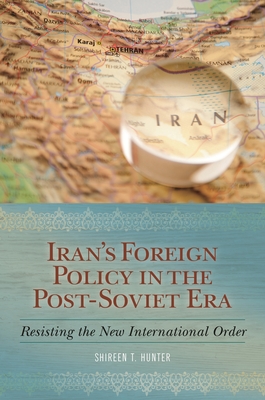 By Shireen Hunter
Email or call for price.

Iran's Foreign Policy in the Post-Soviet Era: Resisting the New International Order provides the first truly comprehensive, in-depth survey of Iranian foreign policy, issue by issue and country by country, since the Islamic Revolution. To help readers understand both the what and the why of Iran's role in the world and formulate useful responses to that role, the author provides a detailed analysis of Iranian foreign policy in all its dimensions.

The first part of the book places Iranian actions, particularly its relations with the United States and other key players, within the context of the emerging international system, while also showing how domestic developments impact foreign policy. The second part surveys Iranian relations with specific actors, notably the United States and Russia, and with key regions, including Europe, Central Asia, the Arab world, Latin America, and Africa. Providing an antidote to existing preconceptions, this incisive analysis lays an analytically sound basis for shaping policies toward Iran--policies with potentially high payoff in terms of regional security and stability.

Shireen T. Hunter, PhD, is visiting professor at the Edmund A. Walsh School of Foreign Service at Georgetown University in Washington, DC.