Peter the Great: His Life and World (Paperback) 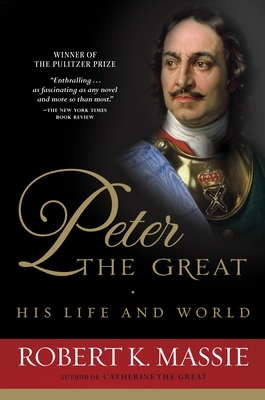 From the Modern Library’s new set of beautifully repackaged hardcover classics by Robert K. Massie—also available are Nicholas and Alexandra and The Romanovs

Against the monumental canvas of seventeenth- and eighteenth-century Europe and Russia unfolds the magnificent story of Peter the Great, crowned co-tsar at the age of ten. The acclaimed author of Catherine the Great, Robert K. Massie delves deep into the life of this captivating historical figure, chronicling the pivotal events that shaped a boy into a legend—including his “incognito” travels in Europe, his unquenchable curiosity about Western ways, his obsession with the sea and establishment of the stupendous Russian navy, his creation of an unbeatable army, his transformation of Russia, and his relationships with those he loved most: Catherine, the robust yet gentle peasant, his loving mistress, wife, and successor; and Menshikov, the charming, bold, unscrupulous prince who rose to wealth and power through Peter’s friendship. Impetuous and stubborn, generous and cruel, tender and unforgiving, a man of enormous energy and complexity, Peter the Great is brought fully to life.

The Modern Library of the World’s Best Books

Peter the Great
Winner of the Pulitzer Prize

“Enthralling . . . as fascinating as any novel and more so than most.”—The New York Times Book Review

“A magnificent and intimate picture . . . Not only the main characters but a whole era become alive and comprehensible.”—Harper’s

Robert K. Massie was born in Lexington, Kentucky, and studied American history at Yale and European history at Oxford, which he attended as a Rhodes Scholar. He was president of the Authors Guild from 1987 to 1991. His books include Nicholas and Alexandra, Peter the Great: His Life and World (for which he won a Pulitzer Prize for biography), The Romanovs: The Final Chapter, Dreadnought: Britain, Germany, and the Coming of the Great War, Castles of Steel: Britain, Germany, and the Winning of the Great War at Sea, and Catherine the Great: Portrait of a Woman.

“Enthralling . . . as fascinating as any novel and more so than most.”—The New York Times Book Review

“Urgently readable . . . the work of a master of narrative history.”—Newsweek

“Written in a style that combines vigor, clarity, and sensitivity . . . should be the envy of historians and novelists alike.”—Chicago Sun-Times