Digital India and the Poor: Policy, Technology and Society (Hardcover) 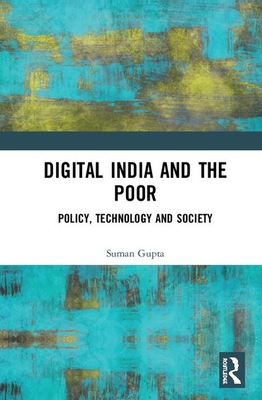 Digital India and The Poor examines how the poor are evoked in contemporary Indian political discourse. It studies the ways in which the disadvantaged are accounted for in the increasingly digitised political economy, commercial and public policy, media, and academic research.

Interrogates the category of the poor in India and how they have come to be classified in economic and policy documents over the past few decades Explores the influential digital education technology 'experiments' conducted in Indian slums from the late 1990s, now popularly known as the 'hole-in-the-wall experiments' Discusses financial inclusion initiatives, predominantly as they converged between 2014 and 2017, such as the Jan Dhan Yojana, the Aadhaar Project, and the banknote demonetisation Presents an in-depth study of the bearing of technology on domestic employment in India

The book will be of great interest to scholars and researchers of South Asian studies, politics, political science and sociology, technology studies, linguistics, and development studies.

Suman Gupta is Professor of Literature and Cultural History at the Open University, UK. He has held visiting positions at Delhi University, India; Peking University, China; University of Texas Austin, USA; Federal University of Campinas, Brazil, among others. He is Honorary Senior Research Fellow at Roehampton University, UK. He has authored various publications including Usurping Suicide: The Political Resonances of Individual Deaths (2017, co-author), Consumable Texts in Contemporary India: Uncultured Books and Bibliographical Sociology (2015), Globalization and Literature (2009), and The Theory and Reality of Democracy: A Case Study in Iraq (2006).