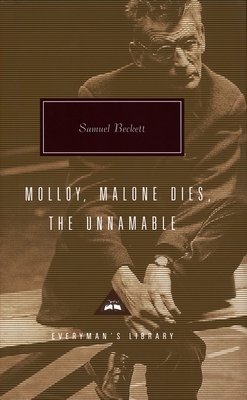 The first novel of Samuel Beckett's mordant and exhilarating midcentury trilogy introduces us to Molloy, who has been mysteriously incarcerated, and who subsequently escapes to go discover the whereabouts of his mother. In the latter part of this curious masterwork, a certain Jacques Moran is deputized by anonymous authorities to search for the aforementioned Molloy. In the trilogy's second novel, Malone, who might or might not be Molloy himself, addresses us with his ruminations while in the act of dying. The third novel consists of the fragmented monologue–delivered, like the monologues of the previous novels, in a mournful rhetoric that possesses the utmost splendor and beauty–of what might or might not be an armless and legless creature living in an urn outside an eating house. Taken together, these three novels represent the high-water mark of the literary movement we call Modernism. Within their linguistic terrain, where stories are taken up, broken off, and taken up again, where voices rise and crumble and are resurrected, we can discern the essential lineaments of our modern condition, and encounter an awesome vision, tragic yet always compelling and always mysteriously invigorating, of consciousness trapped and struggling inside the boundaries of nature.

Samuel Beckett was born in Dublin in 1906 and died in 1989. A playwright and novelist, he studied and taught in Paris and eventually settled there permanently. He wrote primarily in French, frequently translating his works into English himself. His novels include Watt; the trilogy Molloy, Malone Dies, and The Unnamable; How It Is; and The Lost Ones. In his theater of the absurd, Beckett combined poignant humor with an overwhelming sense of anguish and loss. Best known among his dramas are Waiting for Godot and Endgame, which have been performed throughout the world. Beckett was awarded the 1969 Nobel Prize in Literature.
"Beckett is one of the most positive writers alive. Behind all his mournful blasphemies against man there is real love. And he is genuine: every sentence is written as if it had been lived."
—The New York Times Book Review

"[Beckett] possesses fierce intellectual honesty, and his prose has a bare, involuted rhythm that is almost hypnotic."
—Time

"Samuel Beckett is sui generis...He has given a voice to the decrepit and maimed and inarticulate, men and women at the end of their tether, past pose or pretense, past claim of meaningful existence. He seems to say that only there and then, as metabolism lowers, amid God's paucity, not his plenty, can the core of the human condition be approached...Yet his musical cadences, his wrought and precise sentences, cannot help but stave off the void...Like salamanders we survive in his fire."
—Richard Ellmann

"[Beckett] is an incomparable spellbinder...a serious writer with something serious to say about the human condition."
—The New York Times