The Imperfectionists: A Novel (Paperback) 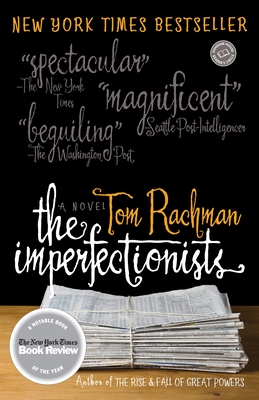 The Imperfectionists: A Novel (Paperback)

“While the quirky characters behind the headlines get front-page treatment in this moving and finely-crafted novel, it is also a valentine to the struggling newspaper business and the seemingly endangered species of editors and journalists who try to produce quality journalism. Ripe for discussion!”
— Molly Young, Orinda Books, Orinda, CA

From the author of The Italian Teacher, this acclaimed debut novel set in Rome follows the topsy-turvy lives of the denizens of an English language newspaper.

Fifty years and many changes have ensued since the paper was founded by an enigmatic millionaire, and now, amid the stained carpeting and dingy office furniture, the staff’s personal dramas seem far more important than the daily headlines. Kathleen, the imperious editor in chief, is smarting from a betrayal in her open marriage; Arthur, the lazy obituary writer, is transformed by a personal tragedy; Abby, the embattled financial officer, discovers that her job cuts and her love life are intertwined in a most unexpected way. Out in the field, a veteran Paris freelancer goes to desperate lengths for his next byline, while the new Cairo stringer is mercilessly manipulated by an outrageous war correspondent with an outsize ego. And in the shadows is the isolated young publisher who pays more attention to his prized basset hound, Schopenhauer, than to the fate of his family’s quirky newspaper.

As the era of print news gives way to the Internet age and this imperfect crew stumbles toward an uncertain future, the paper’s rich history is revealed, including the surprising truth about its founder’s intentions.

Spirited, moving, and highly original, The Imperfectionists will establish Tom Rachman as one of our most perceptive, assured literary talents.
Tom Rachman was born in London and raised in Vancouver. A graduate of the University of Toronto and the Columbia School of Journalism, he has been a foreign correspondent for the Associated Press, stationed in Rome. From 2006 to 2008, he worked as an editor at the International Herald Tribune in Paris. He lives in Rome.
“Marvelous … A rich, thrilling book that is both a love letter to and epitaph for the newspaper world…Mr. Rachman’s transition from journalism to fiction writing is nothing short of spectacular. The Imperfectionists is a splendid original, filled with wit and structured so ingeniously that figuring out where the author is headed is half the reader’s fun. The other half comes from his sparkling descriptions not only of newspaper office denizens but of the tricks of their trade, presented in language that is smartly satirical yet brimming with affection.”
—Janet Maslin, The New York Times

"This first novel by Tom Rachman, a London-born journalist who has lived and worked all over the world, is so good I had to read it twice simply to figure out how he pulled it off. I still haven't answered that question, nor do I know how someone so young ... could have acquired such a precocious grasp of human foibles. The novel is alternately hilarious and heart-wrenching."
—Christopher Buckley, The New York Times Book Review (Front-Page Review)

"[An] acute debut…[Rachman] paints the characters’ small dramas and private disappointments with humanity and humor."
—The New Yorker

“[A] beguiling first novel…One by one these journalists are trotted through their tragicomic hamster wheels…Rachman [is] always finding new ways to surprise us.”
—Washington Post

“Charming. .. . The print newspaper may be an endangered species, but the newsroom - with its deadlines, quirky characters and investigative crusades - still makes for a good story.”
—New York Newsday

“Laced with humor, irony and compassion. . . . some of the chapters are absolute gems.”
—Dallas Morning News

“The Imperfectionists will make you laugh and cry. It's the rare novel that can shift emotional tone effortlessly . . . Magnificent.”
—Seattle Post Intelligencer

“Rachman has created a series of vividly memorable characters.”
—The Boston Globe

“Rachman is an admirable stylist. Each chapter is so finely wrought that it could stand alone as a memorable short story. Slowly, the separate strands become entwined and the line characters have drawn between their work and home lives is erased…. funny, poignant, occasionally breathtaking.”
—Financial Times

“In his zinger of a debut, Rachman deftly applies his experience as foreign correspondent and editor to chart the goings-on at a scrappy English-language newspaper in Rome. Chapters read like exquisite short stories, As the ragtag staff faces down the implications of the paper's tilt into oblivion, there are more than enough sublime moments, unexpected turns and sheer inky wretchedness to warrant putting this on the shelf next to other great newspaper novels.”—Publishers Weekly, starred review

"Elegiac and bitter, funny and shocking.  A group portrait of fascinating characters with nothing in common but their dedication to a doomed idea.  I loved it."
—Arthur Phillips, author of Prague and The Song Is You

"Tom Rachman is absolutely a writer to watch, with the ingenious knack of getting under the skin of his characters.  The Imperfectionists offers a witty, poignant glimpse into the universe of expatriates living in Rome, and the dreams, stress, and melodrama of a small newspaper. Rachman is clearly at home in these worlds, and his portrait is alternately hilarious, sad, intensely human, and always spot-on in its accuracy."
—Andrea Lee, author of Lost Hearts in Italy