Meat Eater: Adventures from the Life of an American Hunter (Hardcover) 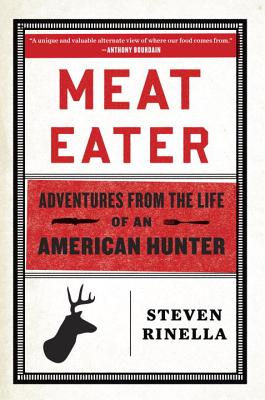 “Revelatory . . . With every chapter, you get a history lesson, a hunting lesson, a nature lesson and a cooking lesson. . . . Meat Eater offers an overabundance to savor.”—The New York Times Book Review

Steven Rinella grew up in Twin Lake, Michigan, the son of a hunter who taught his three sons to love the natural world the way he did. As a child, Rinella devoured stories of the American wilderness, especially the exploits of his hero, Daniel Boone. He began fishing at the age of three and shot his first squirrel at eight and his first deer at thirteen. He chose the colleges he went to by their proximity to good hunting ground, and he experimented with living solely off wild meat. As an adult, he feeds his family from the food he hunts.

Meat Eater chronicles Rinella’s lifelong relationship with nature and hunting through the lens of ten hunts, beginning when he was an aspiring mountain man at age ten and ending as a thirty-seven-year-old Brooklyn father who hunts in the remotest corners of North America. He tells of having a struggling career as a fur trapper just as fur prices were falling; of a dalliance with catch-and-release steelhead fishing; of canoeing in the Missouri Breaks in search of mule deer just as the Missouri River was freezing up one November; and of hunting the elusive Dall sheep in the glaciated mountains of Alaska.

Through each story, Rinella grapples with themes such as the role of the hunter in shaping America, the vanishing frontier, the ethics of killing, the allure of hunting trophies, the responsibilities that human predators have to their prey, and the disappearance of the hunter himself as Americans lose their connection with the way their food finds its way to their tables. Hunting, he argues, is intimately connected with our humanity; assuming responsibility for acquiring the meat that we eat, rather than entrusting it to proxy executioners, processors, packagers, and distributors, is one of the most respectful and exhilarating things a meat eater can do.

A thrilling storyteller with boundless interesting facts and historical information about the land, the natural world, and the history of hunting, Rinella also includes after each chapter a section of “Tasting Notes” that draws from his thirty-plus years of eating and cooking wild game, both at home and over a campfire. In Meat Eater he paints a loving portrait of a way of life that is part of who we are as humans and as Americans.

“Full of empathy and intelligence . . . In some sections of the book, the author’s prose is so engrossing, so riveting, that it matches, punch for punch, the best sports writing.”—The Wall Street Journal

“Steven Rinella is one of the best nature writers of the last decade. . . . This book was a page-turner.”—Tim Ferris

“A unique and valuable alternate view of where our food comes from.”—Anthony Bourdain

Steven Rinella is the author of "American Buffalo: In Search of a Lost Icon, " which was the winner of the Sigurd Olson Nature Writing Award, and "The Scavenger's Guide to Haute Cuisine." He is the host of the television show "MeatEater" on the Sportsman Channel, and was the host of the Travel Channel's "The Wild Within, " which was nominated for a James Beard Award. His writing has appeared in such publications as "Outside, Field and Stream, The New Yorker, The New York Times, Vogue, Men's Journal, "and Salon. Born and raised in Michigan, he currently lives in Brooklyn, New York.

“Truth be told, I have lived a life plenty comfortable with my disdain toward hunters and hunting.  And then along comes Steven Rinella and his revelatory memoir Meat Eater to ruin everything. Unless you count the eternal pursuit of the unmetered parking space, I am not a hunter. I am, however, on a constant quest for good writing. Meat Eater begins with a promise—'This book has a hell of a lot going for it, simply because it’s a hunting story'—and then delivers ceaselessly, like a Domino’s guy with O.C.D. This is survival of the most literate. Graphic, sure, but less so than an episode of ‘CSI,’ and with more believable emoting…this—genuine passion, humbly conveyed—is when nonfiction slaughters fiction and hangs it over its mantel. The text is relentlessly vivid and clear…the commitment, effort and ardor are unflinching. What Rinella does to prepare a muskrat trap when he’s in fifth grade takes five more steps and is infinitely more loving than whatever I did as a fifth grader to break in my baseball glove. With every chapter, you get a history lesson, a hunting lesson, a nature lesson and a cooking lesson, and most of the chapters end with 'tasting notes' on various game. … Readers will never ask themselves, 'What is he talking about?' The only question they might have is, 'Why isn’t this guy the head of the N.R.A.?'…  [A]gain and again, his descriptive powers trump gruesomeness…. Meat Eater offers an overabundance to savor.” —New York Times Book Review

“As Steven Rinella is quick to point out, the hunting story is the oldest sort of story there is. Humans developed language, it is commonly held, to tell them. When told properly, as they are in Meat Eater, such stories are not simple gloats by the successful hunter around the table, proudly chewing on the biggest portion of meat and relishing the respect he has earned from his tribe by bringing back the protein. Rather, they are stories of man's relationships with his fellow hunters, his family, the land and the animals. The stories in Meat Eater are full of empathy and intelligence….In some sections of the book, the author's prose is so engrossing, so riveting, that it matches, punch for punch, the best sports writing. When Mr. Rinella wades into the surging Grand River, to throw a fly for steelheads, the story moves as well as Tom Callahan writing about Johnny Unitas in the 1958 championship or Bill Nack writing about Secretariat.” —Wall Street Journal

“Relentlessly descriptive and endlessly evocative ‘tasting guides’ at the close of each chapter help armchair hunters get a sense of what it might be like digging into their own heaping plate of camp meat, deer hearts or sun-dried jerky…the writing is steadfastly satisfying and clear. The author wisely allows philosophical questions pertaining to the validity of hunting and the efficacy of state-enforced regulations to simmer in the background, and he effectively shows nature in all its glory…An insider’s look at hunting that devotees and nonparticipants alike should find fascinating.” —Kirkus

“On one level, [Rinella has] penned an entertaining collection of the sort of anecdotes that, if you had the good luck to meet him at a Brooklyn hipster’s cocktail party, would be conversational gold. Though animals figure almost as prominently in his narrative as people, Rinella is an astute observer, with an eye for delightfully telling details…But in Meat Eater, Rinella does more than tell stories well and share exotic cooking tips. He writes from the standpoint of a married writer and father living in one of the world’s more densely populated metropolises. His book sets up an implicit contrast between city and wilderness, semi-settled midlife and a more footloose young manhood.” —Paste

“For the typical urbanite, feeling disdain for gun owners is about as easy as broiling a boneless, shrink-wrapped chicken breast: They’re hicks. Red State rubes. Mowing down Bambi with their assault rifles. Meanwhile, we meander the supermarket aisles, poking around for grass-fed this or free-range that, floating in a cloud of ethical contradiction and denial. Without breaking it down this polemically, Steven Rinella, in his memoir, Meat Eater, rigorously describes his trajectory from unexamined to intensely reconstructed killer of wildlife, a progression that should assist the typical city slicker in replacing categorical dismissal with something more akin to nuanced understanding…It’s evident from Chapter 1 that we are in the hands of a seriously experienced hunter-gatherer and writer, which translates on most pages to very authentic-feeling reenactments of the hunt, including both its inherent vibrancy and distress. And critically, we witness Rinella’s evolving sense of what all this killing might mean. Acutely conveyed are the ways society is elbowing aside an age-old practice, often bloody and brutal, and replacing it with practices numbingly antiseptic and increasingly unreal. By the end, regardless of how you feel about guns or hunting, its appeal has ironically been made alive. It’s the perfect negative image of our pervasive technological moment — bracing, dangerous, and direct rather than mediated, packaged, and disassociated….Rinella’s writing is unerringly smart, direct, and sharply detailed…Each of his small-bore narratives, whether it unfolds on Michigan’s Upper Peninsula, Montana, Alaska, Arizona, or Mexico, bristles with the magic of a specific, authentic place.” —Boston Globe

“Chances are, Steven Rinella's life is very different than yours or mine. He does not source his food at the local supermarket. Meat Eater is a unique and valuable alternate view of where our food comes from—and what can be involved. It's a look both backward, at the way things used to be—and forward—to a time when every diner truly understands what's on the end of the fork.” —Anthony Bourdain

“If hunting has fewer participants and advocates than ever before, Rinella is doing his best to reverse the trend. He is informative, passionate, literary, funny, and well, cool. Perhaps what’s most remarkable about his work is that it offers readers who only ‘hunt’ at the local grocery store the opportunity to enjoy a vicarious adventure or two in the world of outdoor protein gathering…Rinella’s audience will continue to grow, based on his thoughtful writing.” —Booklist

“Woven into Rinella’s thoughtful prose detailing his outdoor adventures (or misadventures, in some cases) are historical, ecological, or technical observations dealing with the landscape, the animals, or the manner in which the game is harvested. Also, almost every chapter is finished with short ‘Tasting Notes’ that outline the culinary dos and don’ts for meat from game like squirrel, black bear, and mountain lion. Rinella has a passion for hunting and wilderness that comes across in his writing, and even if you don’t agree with his ideas on hunting lions with dogs or catch-and-release fishing you can’t help pondering the arguments he makes. And that seems to be the point of the book, to make you think—about your relationship with nature, about what you eat and why you eat it—and if that’s Rinella’s motivation, this book succeeds.” —Publishers Weekly