Contempt of Court: The Turn-of-the-Century Lynching That Launched a Hundred Years of Federalism (Paperback) 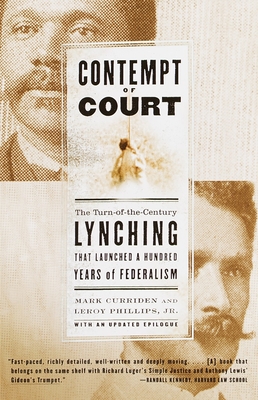 In this profound and fascinating book, the authors revisit an overlooked Supreme Court decision that changed forever how justice is carried out in the United States.
In 1906, Ed Johnson was the innocent black man found guilty of the brutal rape of Nevada Taylor, a white woman, and sentenced to die in Chattanooga, Tennessee. Two black lawyers, not even part of the original defense, appealed to the Supreme Court for a stay of execution, and the stay, incredibly, was granted. Frenzied with rage at the decision, locals responded by lynching Johnson, and what ensued was a breathtaking whirlwind of groundbreaking legal action whose import, Thurgood Marshall would claim, "has never been fully explained." Provocative, thorough, and gripping, Contempt of Court is a long-overdue look at events that clearly depict the peculiar and tenuous relationship between justice and the law.

Mark Curriden holds a B.A. in history from Tennessee Temple University and a J.D. from the Woodrow Wilson Law School in Atlanta. He’s a senior writer at ABA Journal and at the Texas Lawbook. He’s written for the Dallas Morning News as well as the Atlanta Journal-Constitution, and was the Writer in Residence at the SMU Dedman School of Law.

Leroy Phillips Jr. was born in Cattanooga in 1935 and graduated from the University of Tennessee College of Law in 1960. He practiced law for 44 years before retiring in 2005. His book, Contempt of Court, co-authored with Mark Curriden, won the American Bar Associations Silver Gavel Award for excellence in media and the arts in 2000. He died in 2011.

“Contempt of Court should join the handful of books such as Anthony Lewis’ Gideon’s Trumpet as required reading for anyone who wants to understand how the Constitution protects individual citizens.”–Milwaukee Journal Sentinel