The Last Man on the Mountain: The Death of an American Adventurer on K2 (Paperback) 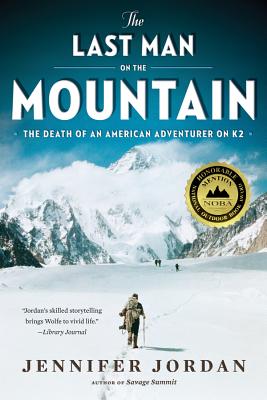 By Jennifer Jordan
$16.95
On Our Shelves Now

"A fascinating tale…Readers who are into high-altitude adventure stories won’t be disappointed." —Associated Press

In 1939 the Savage Mountain claimed its first victim. Born into vast wealth yet uneasy with a life of leisure, Dudley Wolfe, of Boston and Rockport, Maine, set out to become the first man to climb K2, the world’s second-highest mountain and, in the opinion of mountaineers, an even more formidable challenge than Mt. Everest. Although close to middle age and inexperienced at high altitude, Wolfe, with the team leader, made it higher than any other members of the expedition, but he couldn’t get back down. Suffering from altitude sickness and severe dehydration, he was abandoned at nearly 25,000 feet; it would be another sixty-three years before the author discovered his remains.

Jennifer Jordan, an award-winning author, filmmaker, and screenwriter, has twice lived at the base of K2, where in 2002 she found the remains of Dudley Wolfe, the hero of The Last Man on the Mountain, her second book. She lives in Salt Lake City, Utah.

[A] fascinating tale, taking the reader from Manhattan high society to the slopes of what the climbing community calls the ‘Savage Summit.’…Readers who aren’t familiar with high-altitude mountaineering will have no problem getting into it…Readers who are into high-altitude adventure stories won’t be disappointed. [Jordan]’s done her job, refuting the stereotype that Wolfe was a fat and slow climber who tried to be the first to buy his way atop a Himalayan peak.
— Rob Merrill - ABC News

The Last Man on the Mountain will find its place in the adventure canon of man versus mountains, when wool, hemp, and hobnails ruled, and class and national differences roiled beneath the surface…Jordan has done a great job.

— Peter Porterfield, author of In the Zone and Classic Hikes of the World

Jordan is solid with her generous descriptions of her subject’s good nature…and with her account of finding evidence of Wolfe’s story some 60-plus years after the fact on the mountain he scaled but did not leave.
— Kirkus Reviews