American Oligarchs: The Kushners, the Trumps, and the Marriage of Money and Power (Paperback) 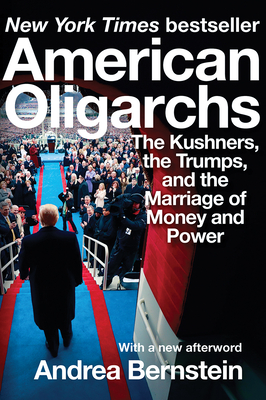 American Oligarchs: The Kushners, the Trumps, and the Marriage of Money and Power (Paperback)

An absorbing, novelistic, and powerfully affecting work of history and investigative journalism that tracks the unraveling of American democracy.

In American Oligarchs, award-winning investigative journalist Andrea Bernstein tells the story of the Trump and Kushner families like never before. Building on her landmark reporting for the acclaimed podcast Trump, Inc. and The New Yorker, Bernstein brings to light new information about the families’ arrival as immigrants to America, their paths to success, and the business and personal lives of the president and his closest family members. Drawing on hundreds of interviews and more than one hundred thousand pages of documents, American Oligarchs details how the Trump and Kushner dynasties encouraged and profited from a system of corruption, dark money, and influence trading, and reveals the historical turning points and decisions?on taxation, regulation, white-collar crime, and campaign finance laws?that have brought us to where we are today. A new afterword examines how the two families’ transactional politics left America particularly vulnerable to the crises of 2020.

Andrea Bernstein is the Peabody Award–winning cohost of the acclaimed WNYC/ProPublica podcast Trump, Inc., which won the prestigious 2019 Alfred I. duPont–Columbia University award. In addition to broadcast appearances on outlets including PBS NewsHour, CNN, and Fresh Air, her work has appeared in The New Yorker, the New York Times, the Washington Post, New York, and on NPR.
Anyone concerned about American democracy should read Andrea Bernstein’s devastating exposé of the Trump and Kushner families.
— Jane Mayer, The New Yorker staff writer and New York Times best-selling author of Dark Money