Cool Beans: The Ultimate Guide to Cooking with the World's Most Versatile Plant-Based Protein, with 125 Recipes [A Cookbook] (Hardcover) 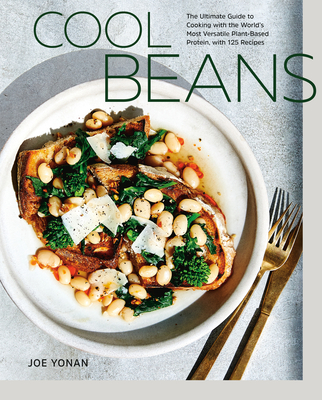 Cool Beans: The Ultimate Guide to Cooking with the World's Most Versatile Plant-Based Protein, with 125 Recipes [A Cookbook] (Hardcover)

“This is the bean bible we need.”—Bon Appétit

After being overlooked for too long in the culinary world, beans are emerging for what they truly are: a delicious, versatile, and environmentally friendly protein. In fact, with a little ingenuity, this nutritious and hearty staple is guaranteed to liven up your kitchen.

Joe Yonan, food editor of the Washington Post,provides a master base recipe for cooking any sort of bean in any sort of appliance—Instant Pot, slow cooker, or stovetop—as well as creative recipes for using beans in daily life, from Harissa-Roasted Carrot and White Bean Dip to Crunchy Spiced Chickpeas to Smoky Black Bean and Plantain Chili. Drawing on the culinary traditions of the Middle East, the Mediterranean, Africa, South America, Asia, and the American South, and with beautiful photography throughout, this book has recipes for everyone. With fresh flavors, vibrant spices, and clever techniques, Yonan shows how beans can make for thrillingdinners, lunches, breakfasts—and even desserts!
Joe Yonan is the two-time James Beard Award-winning food and dining editor of The Washington Post. He is the author of Eat Your Vegetables, which was named among the best cookbooks of 2013 by The Atlantic, The Boston Globe, and NPR's Here and Now, and Serve Yourself, which Serious Eats, David Lebovitz, and the San Francisco Chronicle named to their best-of-the-year lists. Joe was a food writer and travel section editor at The Boston Globe before moving to Washington in 2006 to edit the Post's food section. He writes the Post's "Weeknight Vegetarian" column and for five years wrote the "Cooking for One" column, both of which have won honors from the Association of Food Journalists.
“Cool Beans . . . has been, by far, the cookbook I’ve cooked out of most this year. The book’s premise is a simple one: this food you thought was just ok, is actually really delicious, and really easy to make delicious in more ways than you likely thought possible.”—Daniel Modlin, The Daily Beast

“Joe Yonan’s obsession with the humble bean is a fascinating read. Creativity, passion, and knowledge are visible in every dish. From black chickpea hummus to red bean ice cream, each recipe is both surprising and completely achievable.”—Yotam Ottolenghi, author of Jerusalem and Ottolenghi Simple

“Where I come from in northern Spain, beans play a starring role in many of our dishes, so I am happy to see that Joe has cast beans as the lead in this book, showing us that they are capable of doing so much! Joe has always been a big thinker when it comes to eating better—both for our bodies and for our planet—and this book is a blueprint for reducing our meat consumption in a thoughtful and delicious way.”—José Andrés, chef and humanitarian

“Joe Yonan’s delectable Cool Beans is a collection of more than 100 very enticing recipes, all properly attributed to the source of inspiration. Aside from the recipes, there’s a great deal to learn in Cool Beans. This book should earn a place of honor in anyone’s kitchen. I know that it will in mine.”—Deborah Madison, author of Vegetable Literacy

“Joe Yonan has created the most fascinating and unexpected adventure into the world of beans. The best part is that you want to try every recipe, because he makes them easy, accessible, and irresistible. His knowledge, kindness, and sense of humor is such delightful company on every page. As you cook your way from soups to desserts, he also manages to open a window into fabulous cuisines around the world. He connects us all through an ingredient he loves. So excited and grateful for this book!”—Pati Jinich, star of Pati’s Mexican Table

“From the very first recipe in Cool Beans, you know you are in good hands. Joe Yonan’s collection of bean-based indulgences is hip without being pretentious, easy without being simple, and just plain inspiring, no matter how you eat. This book is a beautiful celebration of beans. It belongs in every kitchen.”—Steve Sando, founder of Rancho Gordo