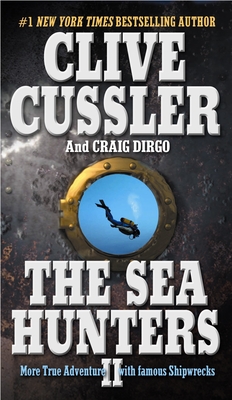 For decades, Clive Cussler’s real-life NUMA®, the National Underwater and Marine Agency, has scoured rivers and seas in search of lost ships of historic significance. His teams have been inundated by tidal waves and beset by obstacles—both human and natural—but the results, and the stories behind them, have been dramatic.

In this follow-up to their bestselling first account, The Sea Hunters, Cussler and colleague Craig Dirgo provide another extraordinary narrative of their true seagoing—and land—adventures, including their searches for the famous ghost ship Mary Celeste, found floating off the Azores in 1874 with no one on board; the Carpathia, the ship that rescued the Titanic survivors and was itself lost to U-boats six years later; and L’Oiseau Blanc, the airplane that almost beat The Spirit of St. Louis across the Atlantic before disappearing in the Maine woods.

All these, plus steamboats, ironclads, a seventeenth century flagship, a certain famous PT boat, and even a dirigible, are tantalizing targets as Cussler proves again that truth can be “at least as fun, and sometimes stranger, than fiction” (Men’s Journal).
Clive Cussler is the author or coauthor of over fifty previous books in five bestselling series, including Dirk Pitt®, NUMA® Files, Oregon® Files, Isaac Bell, and Sam and Remi Fargo. His nonfiction works include Built for Adventure: The Classic Automobiles of Clive Cussler and Dirk Pitt, and Built to Thrill:More Classic Automobiles from Clive Cussler and Dirk Pitt, plus The Sea Hunters and The Sea Hunters II; these describe the true adventures of the real NUMA, which, led by Cussler, searches for lost ships of historic significance. With his crew of volunteers, Cussler has discovered more than sixty ships, including the long-lost Confederate ship Hunley. He lives in Colorado and Arizona.

Craig Dirgo has been special projects manager on many NUMA expeditions since 1987 and now serves as a trustee. He is the coauthor of The Sea Hunters and The Sea Hunters II.