Noah Webster: The Life and Times of an American Patriot (Paperback) 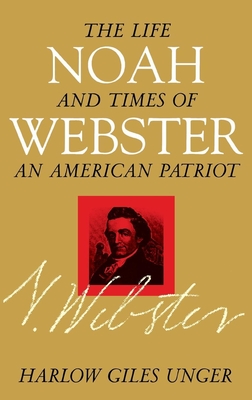 Noah Webster was a truly remarkable man, shrewd, passionate, learned and energetic, God-fearing and patriotic. Mr. Unger has done a fine job reintroducing him to a new generation of Americans. --Washington Times Noah Webster The Life and Times of an American Patriot ""More than a lexicographer, Webster was a teacher, philosopher, author, essayist, orator, political leader, public official, and crusading editor. Webster's life thrust him into every major event of the early history of our nation, from the Revolutionary War to the War of 1812. He touched the lives of the most renowned Americans --and the most obscure. He earned the love and friendship of many, the hatred of some, but the respect of all. Noah Webster helped create far more than an American dictionary; he helped create an American nation."" --from the Prologue In the first major biography of Noah Webster in over sixty years, author Harlow Unger creates an intriguing portrait of the United States as an energetic and confident young country, even when independence was fragile and the future unclear. Harlow Unger brilliantly restores Webster's monumental legacy as a teacher, legislator, philosopher, lawyer, editor, and one of history's most profoundly influential lexicographers. Breathtaking adventure--from the American Revolution to the War of 1812--and masterful scholarship converge in this riveting chronicle of a singularly American intellect.

HARLOW GILES UNGER was a foreign news editor at the New York Herald Tribune and a correspondent for the Times in London. A former professor of English and journalism, he is the author of six books on education. Mr. Unger lives in New York City and Paris, France.