American Spy: My Secret History in the Cia, Watergate and Beyond (Hardcover) 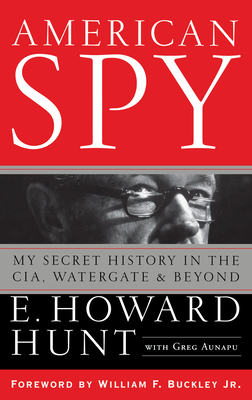 Startling revelations from the OSS, the CIA, and the Nixon White house

Think you know everything there is to know about the OSS, the Cold War, the CIA, and Watergate? Think again. In American Spy, one of the key figures in postwar international and political espionage tells all. Former OSS and CIA operative and White House staffer E. Howard Hunt takes you into the covert designs of Presidents Eisenhower, Kennedy, Johnson, and Nixon:

Complete with documentation from audiotape transcripts, handwritten notes, and official documents, American Spy is must reading for anyone who is fascinated by real-life spy tales, high-stakes politics, and, of course, Watergate.

White House "plumber" E. HOWARD HUNT served as a covert operative for the CIA from 1950 until the 1970s, and participated in many of the agency's most secret missions, both abroad and in the United States. He is also the author of more than seventy spy novels. GREG AUNAPU is a nationally respected journalist, who worked as a freelancer for Time and People magazines for ten years, and has reported for many national news organizations. He is coauthor of two previous books, most recently, "Without a Trace."